A single metal oxide can neutralize chemicals and biological agents 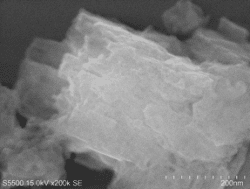 The degradation of paraoxon, a simulant of VX, and some bacteria can be carried out by a magnesium oxide but its effectiveness depends closely on its crystalline structure. The R & D team at Ouvry SAS has just published these results in Chemico-Biological Interactions.

A single metal oxide can degrade both chemical and biological warfare agents. This oxide, which acts through hydrolysis and oxidation reactions on the chemical agents and via hydrogen peroxide and oxygen-containing intermediates and / or by direct action on the bacterial structures, leads to the formation of non-toxic degradation products because of their small size.

To develop a broad spectrum decontamination system we tested a large number of nanoparticles metal oxides because they are well known for their high catalytic activity. Among these compounds, Magnesium oxide MgO is, according to work carried out separately, able to neutralize chemical toxins and microorganisms.
The aim of this work was to find a single compound acting on both paraoxon (simulating VX) and on bacteria.

MgO is non-toxic to living organisms and the environment, affordable and active on chemical and biological agents. Producers offering a wide choice of products, 2 of them were tested: MgO-1 (labeled 325mesh) and MgO-2 labeled <nanopowder <50 nm.

The bacterial strains were {Staphylococcus aureus}, {Escherichia coli} and spores of {Bacillus subtilis}. These strains were chosen because they represent the bacterial diversity. The strains more representative of the threat were tested in a second step and the results will be published later.

Degradation of paraoxon was measured by the means of a spectrophotometer at the wavelength of 270 nm. The antibacterial activity was measured by enumeration of the CFUs in agar medium.

The two nanopowders of MgO give totally different results.

Under these experimental conditions, MgO-1 neutralize nearly 90% of paraoxon whereas MgO-2 destroys only 20% after 3 hours of action. With the Fuller’s earth used as a control, 10% of paraoxon was missing, which corresponds to the substrate remaining absorbed on the surface of the powder.

These results are logical because of the bacterial structure: gram-negative bacilli ({E. coli}) are more sensitive to the direct action of the nanoparticles on the membrane. However, gram-positive bacteria ({S. aureus}) has an important peptidoglycan which reduces access to the latter. No system using a nano-oxide alone has been described with an effect on {Bacillus} spores. The tunics and the cortex protect perfectly the spore and the too dry internal medium of the spore does not allow the formation of the oxygenated products.

Study of the crystal structure

Why do these two MgO nanopowders present such a discrepancy in the results of degradation, whether with respect to chemicals than with microorganisms?

The characteristics of the commercial products are not very explicit: MgO-1: “325mesh” and MgO-2 “nanopowder <50 nm”.

We have therefore studied the crystal structure of these two compounds by means of electron microscopy and X-ray diffraction. First, the results show that these compounds exhibit a nanometric size. The MgO-1 particles have an average size of 11 nanometers and are arranged in a sheet (see figure). The MgO-2 particles measure 25 nm on average and are not arranged in a sheet (see figure). It therefore appears that the activity of these nanoparticles is inversely proportional to their size and that the arrangement in a sheet allows a greater surface area of ​​contact between the active particles and the chemical and / or biological substance to be destroyed.

This work was carried out by the R & D team of Ouvry SAS. This publication follows the poster presented at the “CBRN Research and Innovation, Antibes-Juan-les-Pins, 16-19 March 2015” and has been published in the special issue of Chemico-biological Interactions.

The article is available on the following link.