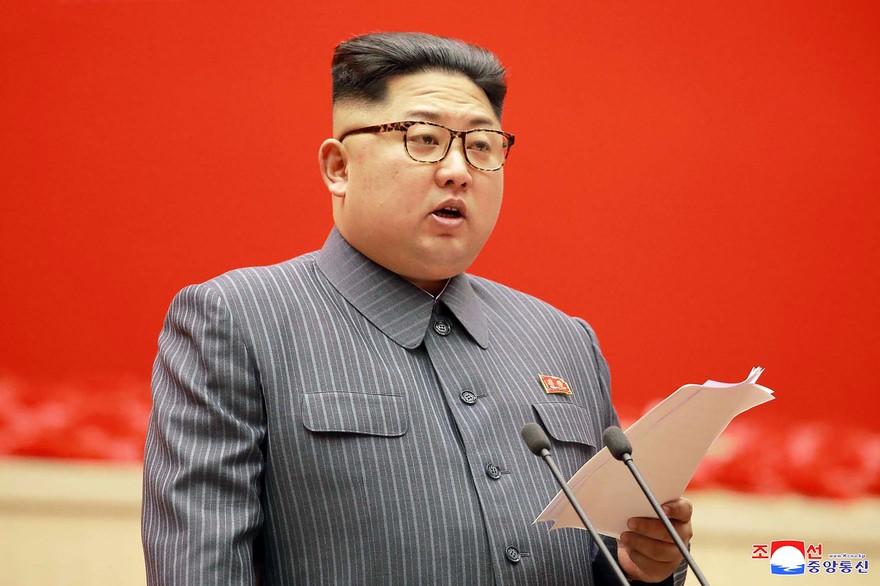 North Korean deserters who have fled their country undergo a thorough medical examination while in South Korea. These tests are representative of the health status of the population. So in 2015, one of these soldiers had a very important intestinal parasitosis. The presence of roundworms about 27 cm long can be interpreted as ascariasis characteristic of a significant infestation. It is very often caused by the use of untreated human feces as fertilizer. This practice began in the 1990s, due to a lack of resources to obtain chemical fertilizers. When eaten raw, vegetables grown in this type of soil can contain parasites that then grow in human organisms.

The medical team also found corn in the soldier’s stomach. Corn imported from China is part of the basic North Korean regime. This is Pyongyang’s only solution to the famine that has plagued the country since the 1990s. The medical records of North Korean refugees showed high rates of hepatitis B, hepatitis C and tuberculosis. North Korea is a very poor country and, like all poor countries, it has many health problems; medical personnel are poorly trained and work with obsolete equipment.

What is much more disturbing is that in the serum of one of the recently defected soldiers, antibodies were found against Bacillus anthracis, an agent of anthrax. This means that either it has been in contact with the anthrax bacillus and has developed its own immunity, or it has been vaccinated against this bacterium.  The spectre of the biological weapon in Pyongyang’s hands is suddenly reactivated!

To South Korea, which claims that its northern neighbour is able to produce biological agents such as anthrax and smallpox, Kim Jong-un retorts that as a signatory to the Biological Weapons Convention (BWC), it opposes the development, manufacture, stockpiling and possession of biological weapons. There are reports of anthrax warhead loading tests on its missiles. In any case, the positive immunity of a North Korean soldier to anthrax shows that the anthrax virus is present in the country. Under these conditions, South Korea is seeking to develop a vaccine that will not be ready until 2019.

Regarding chemicals, North Korea would have a stockpile of between 2,500 and 5,000 tons of chemical weapons. The fact that it has this type of chemical is no longer in doubt after it was discovered that it was VX gas that was used in Kim Jong-nam’s assassination. In fact, he had atropine tablets in his backpack when he was attacked…

The cause of the disease is Bacillus anthracis. this gram positive bacilli  is able to give  spores resisting to acids, bases, high temperatures, pressure and time (spores recovered in Egyptian mummies germinated to give back vegetative forms!). 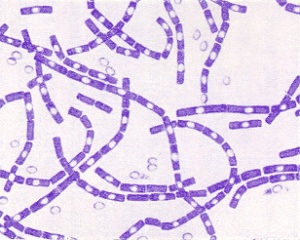 The uncoloured spores inside the bacilli are clearly distinguishable.

It exists in 3 forms:

The cutaneous form: it represents more than 95% of charcoal cases at present. The spores pass through the skin at the level of skin lesions. What looks like an insect bite at first turns into an ulcer about 30 mm in size and then necrosis. Death can occur in 20% of cases if treatment is not available.  The people most at risk of developing the disease are those who are in close contact with animals: farmers, veterinarians, tanners and carcass transporters.

The gastrointestinal form follows the ingestion of contaminated meat, for example. The symptoms associated with this form of the disease are gastro-intestinal. It is an acute inflammation of the digestive tract. The patient has significant nausea, vomiting, fever, abdominal pain and diarrhoea. Mortality associated with this pathological type ranges from 25% to 60%.

The pulmonary form follows the inhalation of spores. The primary symptoms are similar to a cold. Complications appear rapidly (within a few days) and correspond to severe respiratory problems, severe headaches and muscle aches and pains. It can lead to septic shock (presence of bacterial toxins in the blood, leading to circulatory disorders and impacting the cardiovascular system). Without treatment, this form is lethal to almost all affected individuals. This disease was once called woollen sorter’s disease, the spores contained in the leather were dispersed in the atmosphere during their treatment and then inhaled by workers. They could also contract charcoal from skin contact.

Anthrax disease occurs worldwide and affects both domestic and wild animals. The most affected animal populations are cattle, sheep, goats, camels and antelopes. These are often sporadic cases. In the 19th century, when infected animals were buried without being treated with quicklime, resistant spores were brought up to the surface of the soil, especially by earthworms, before being ingested again by healthy animals, so that animals could no longer be grazed there: the contaminated meadows were then called “damned fields”.

It is important to remember that anthrax does not spread from one patient to another.

The usual treatment for anthrax is based on antibiotic therapy: penicillin, doxycycline or ciprofloxacin.

Pulmonary anthrax, which is of particular interest to us in its military aspect, is usually treated with intravenous ciprofloxacin or doxycycline, along with two other intravenous antibiotics (e. g., ciprofloxacin or doxycycline). clindamycin, rifampin, penicillin, ampicillin, vancomycin, imipenem, clarithromycin or chloramphenicol). Oral antibiotic therapy then takes over for a total of 60 days, this long time corresponds to the sometimes late germination of spores in the body. As soon as the diagnosis is made, and at the same time as the antibiotic therapy, a vaccination protocol is applied that helps with the immune response.

Emergent biosolution commercializes 3 products for the treatment of anthrax: one vaccine and two serotherapy products. (Odecon and Ouvry are exclusive distributors in France).

BioThrax (Anthrax Vaccine Adsorbed) is a protein antigen. It contains neither living nor dead anthrax bacteria, but only an antigenic protein.  Injected very early after contamination, it promotes the development of immunity.

Anthrasil is an immunoglobulin directed against B. anthracis and is prepared from plasmas of hyperimmune donors.

Raxibacumab which is a monoclonal antibody.

While the chemical threat is still as significant as ever, the biological threat must not be ignored, including by countries that are contracting parties to the Biological Weapons Convention.