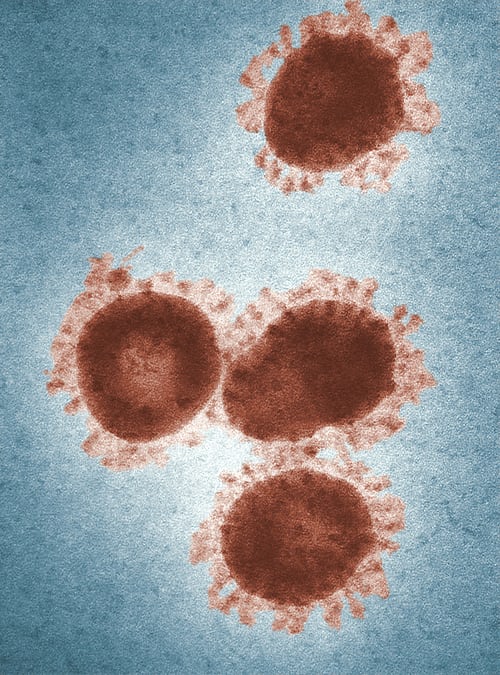 They belong to the family Coronaviridae.

These are enveloped viruses in which the nucleic acid is a single-stranded RNA. They owe their name to the presence of protuberances on their periphery giving them a “crown” appearance under the electron microscope.

A number of them directly infect humans (human coronavirus) and are found in pediatric respiratory infections without being formally responsible for the disease, except perhaps for giving harmless colds.

Other coronaviruses are found in the respiratory tracts of mammals and birds and infect humans secondarily.

Three coronaviruses have given, and are still giving, worrying epidemics for the populations and the biologists who track their evolution.

The disease is caused by the SARS-Cov coronavirus.

The clinical presentation is that of an atypical pneumopathy with a fever above 38°C appearing suddenly, associated with signs of low respiratory impairment (cough, dyspnea, respiratory discomfort, etc.) occurring in a person coming from a country or zone where active transmission of SARS-Cov has been described.

The epidemic began in mid-November 2002 with 300 patients with atypical pneumonia in Guangdong, China. China censored information on these first cases so that the WHO did not issue an official statement until March 12, 2003. After the officialization, the reaction of the Chinese authorities was exemplary with the dismissal of the mayor of Beijing and then the Minister of Health. The epidemic ended in June 2003, 30 countries were affected, 8,500 patients were infected and 774 died.

It was a contaminated doctor from Guangdong who travelled to Hong Kong where he stayed in a 4-star hotel. Other residents returned home, taking the virus with them on regular flights. The virus spread rapidly worldwide through air travel, with the largest outbreaks concentrated in airport hubs or densely populated areas. SARS soon proved to be transmitted from person to person through the air, probably by contaminated droplets of saliva. Transmission through saliva droplets (coughing) also occurs during the incubation period, which can last from 2 to 6 days.

The outbreak was sudden and the rapid disappearance without reoccurrence for 18 years. The virus is still thought to be circulating in animals but is no longer detectable in humans.

A few years later and after sequencing the various SARS-Covs, it was revealed that the initial reservoir of the virus was a rhinolopher chiropteran (bat). The virus then passed to an intermediate host, the civet, where it adapted rapidly to humans. The civet is not a usual host for the coronavirus. There was therefore a double transgression: “rhinolophe-civet” and “civet-human”. In the Guangdong market civets and rhinolophers were locked in the same cages, both species being edible. The palm civet (musk cat) is served in restaurants in Hong Kong .

It was the simultaneous presence on the Guangdong market of the reservoir (bat), the intermediate host (civet) and the definitive host (human) that caused the outbreak to begin.

The strains found in the civet were identical to those of the first Chinese human cases. Then, the strains of the first dispersal phase (Vietnam) carried deletions (19 nucleotides) in the Orf8 genes coding for a lung binding protein, while the strains that spread afterward throughout the world carried even larger deletions (82 nucleotides) allowing them to adapt to humans: it is said that the strains had become humanized. An extremely rapid process in the case of SARS, this type of adaptation usually takes 10 years to complete.

For the first time, poor countries have been left out because of the lack of air transport…

It causes acute renal failure and severe pneumonia. The incubation period is 5 to 15 days.

The first human case was a man from Qatar who died in Jeddah, Saudi Arabia, in July 2012, falling ill after a trip to Saudi Arabia.

The virus is highly pathogenic. The epidemic lasted from June 2012 to 31 May 2015: 1219 cases/449 deaths. It rages in Saudi Arabia, United Arab Emirates but also in Europe (2 cases in France), USA, Asia but the patients had always been in one of these countries.

Subsequent studies have shown that the natural reservoir is a Pipistrellus pipistrellus bat. The virus then adapted to an intermediate host which is the dromedary and then passed into humans through the consumption of raw milk (or undercooked meat, or urine). The process is quite equivalent to that of SARS-Cov. Human-to-human transmission (family, caregivers) has been clearly demonstrated, but it is mostly within hospitals: the cases described show the passage of the virus from patient to caregiver. The prognosis is poor when there is concomitant morbidity (diabetes, renal failure, chronic lung infection, immunosuppression). The estimated case-fatality rate is about 30%.

The main symptoms are fever and respiratory signs such as cough, tightness and/or chest pain, sometimes with dyspnea (shortness of breath). The incubation period is between 7 and 14 days. The most severe cases have occurred in debilitated individuals with comorbidities.

An outbreak of pneumonia emerged in the city of Wuhan (Hubei Province, China) in December 2019. On 7 January 2020, the discovery of a new coronavirus, 2019-nCoV, different from the SARS-CoV and MERS-CoV viruses, was officially announced by Chinese health authorities and the World Health Organization (WHO).

On 23 January 2020, 614 confirmed cases of infection with 2019-nCoV, 17 deaths in Wuhan, 25 provinces in mainland China including Hong Kong and Macao are reporting cases, 5 other countries have confirmed one or more imported cases: Thailand, Japan, Republic of Korea, United States, Taiwan.

To try to stop the epidemic, the Chinese authorities have quarantined 3 cities including Wuhan by prohibiting the exit of the inhabitants of the city. The Chinese New Year festivities have been suppressed in Beijing and even the forbidden city is closed!

The majority of the cases initially described involved people who had frequented the Huanan market in Wuhan, where live wild animals such as rats, crocodiles, salamanders and other snakes were sold there completely illegally.

The hypothesis of a zoonosis (disease transmitted by animals) is therefore preferred. The risk of human-to-human transmission, initially considered to be non-existent or low, has now been established due to the occurrence of pneumonia caused by this virus among Chinese health care workers who took care of the first sick patients.

What’s the reservoir animal? Is there a secondary host (among those that were sold illegally alive on the market)? How was the transition to humans? Does the virus persist in the environment?

These are all questions that Pasteur Institute and many other research organizations are now asking themselves.

Coronaviruses are worrying in that they are capable of evolving very rapidly from their reservoir site to humans with the passage of mammals such as civet or camel for SARS-Cov and MERS-Cov. We therefore look forward to the evolution of 2019-nCoV.

Nevertheless, let us keep in mind that influenza still causes between 290,000 and 650,000 deaths a year in the world even though there is a vaccine, and that, worse still, the number of measles cases has tripled in the United States between 2018 and 2019 and this is the first time since 1922 that the number of cases is so high even though a very effective vaccine has existed since 1963.

It is, of course the « anti-vaccines » that are responsible for this spectacular rise, which is as worrying as the spread of coronaviruses!