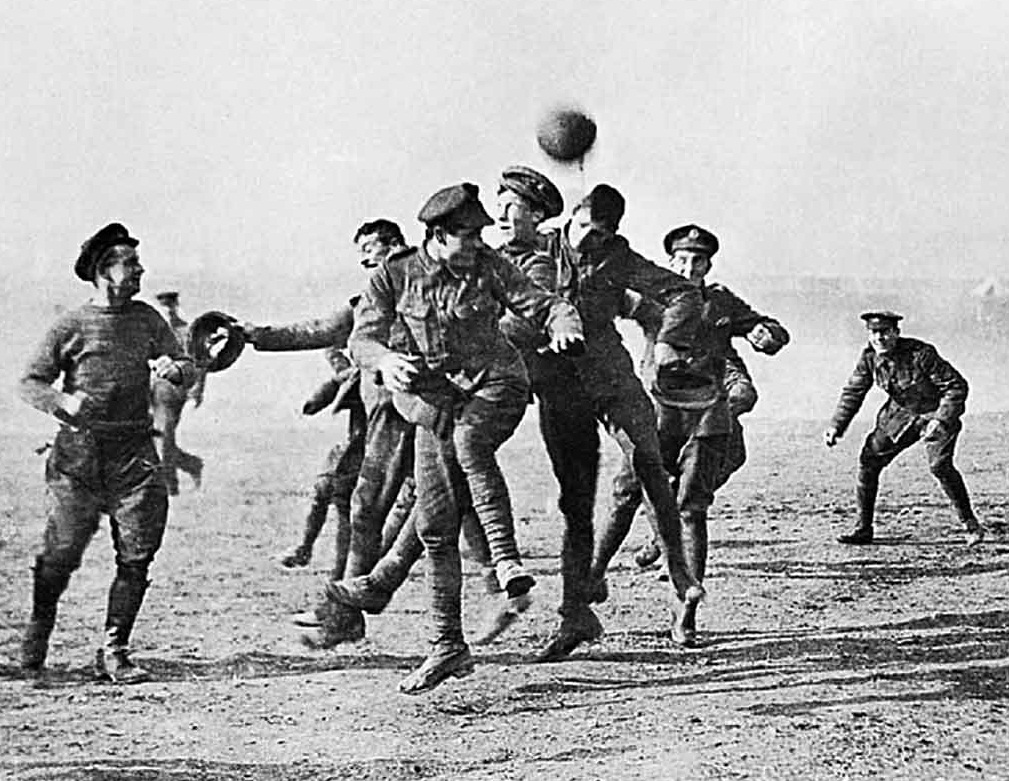 It is December 25, 1914. The war is raging and on the Belgian front, the English (the Tommies) and German (the Teutons) combatants, positioned on either side of a no man’s land of a few dozen meters, come out of their trenches and fraternize (see our blog article).

After burying their dead, the soldiers shook hands and exchanged cigarettes and chocolate. The Germans who had fir trees gave them to the English and lit them with candles. The commonality of situations (mud, cold…) and sufferings, as well as the use of religion on both sides of the front, allowed for this rapprochement. In some places, the men sang in chorus the same Christmas songs when they were in Latin.

So why did UEFA erect a stele in 2014 in Ploegsteert, a small Belgian town on the front line in 1914 where fraternization actions took place? To commemorate a soccer match that took place in the middle of the battle zone between the British and the Germans on December 25, 1914.

Some dispute the reality of this meeting.

Nevertheless, it seems that the match did take place, of course the field was not flat, the goals were not the regulation size and there were no official jerseys but, a German lieutenant testifies: “we scored the goals with our kepis, the teams were quickly formed for a match on the frozen mud, and the Fritz (sic) beat the Tommies 3-2”. Another source, a letter from a British doctor in the London Rifle Brigade. “The regiment had a soccer match against the Saxons, who beat them 3-2”.

Other letters from soldiers attest to “the English brought a football from their trenches, and very soon a lively game ensued”, yet another “Suddenly a Tommy came with a soccer, already kicking and taunting, then started a soccer game”.

Unfortunately, there is no photo to prove such an encounter. The photograph at the top of the article does not correspond to this event and is entitled “British soldiers playing soccer on a Greek beach in 1915 (In the public domain by virtue of its age.)

However, this story shows how soccer is a universal sport. In the middle of the 2022 World Cup, we see how much this sport can unite people, even in times of war.

With the official laying of the monument dedicated to this soccer match, perhaps we wanted to commemorate at the same time, the sport, the Christmas party and the fraternizations, very particular moments when men regain some dignity by showing that there is still a bit of humanity on the battlefield.

Let’s take the opportunity of a world cup at Christmas time to remember these rare moments!

Merry Christmas and happy holidays to all of you.