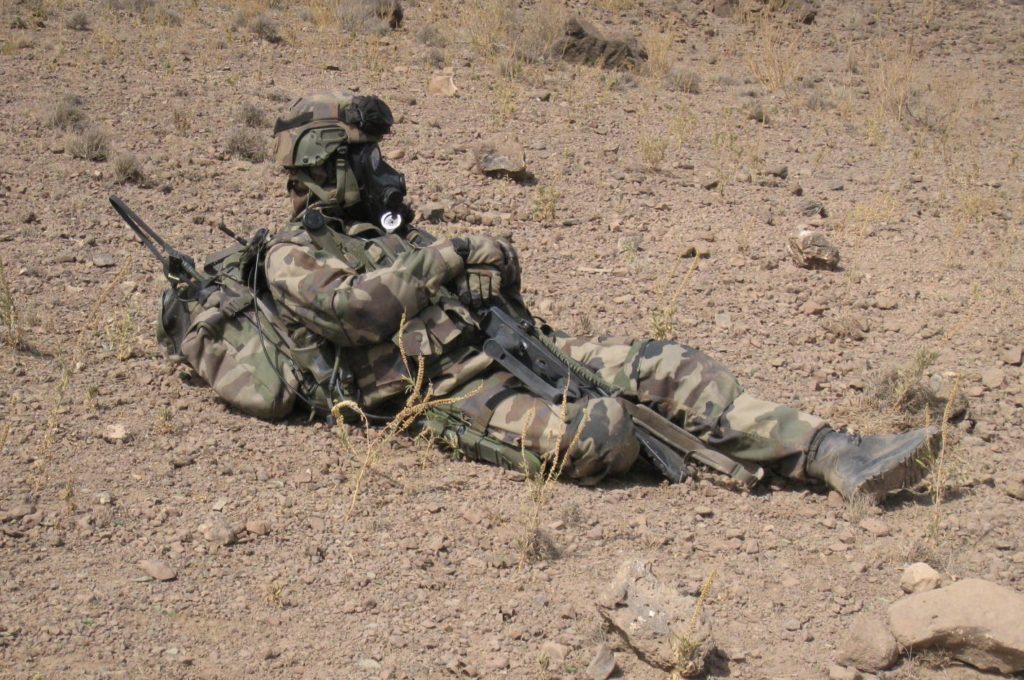 A recent article shows us that American researchers are interested in the intestinal microbiome of war fighters in order to improve their performance on missions.

The microbiome is the place where a complex set of microorganisms called microbiota develops. In humans, microbiomes from the nose/mouth/throat, skin, lungs, digestive system and vagina are distinguished. By extension, the microbiome will refer to all the genomes constituting the microbiota.

In all human microbiomes more than 1,000 different species have been identified, only 1/3 of which are common to all humans, the remaining 2/3 being specific to the individual. The total weight of these microorganisms is 2 kilograms.

Each individual would have about 160 species, about twenty of which belong to the common human base where they are responsible for the basic functions of the microbiome. Each individual has his own intestinal microbiota that characterizes him.

Microorganisms are bacteria, yeasts, parasites and viruses: they live in symbiosis with each other and with the organism to which they belong.

In the past, when it was about isolating and identifying the different species belonging to the “intestinal flora”, only a very small minority of these species could be cultivated. New high throughput sequencing techniques have allowed us to identify a very large number of microorganisms and thus better understand the complex interactions that occur between them and with the host. 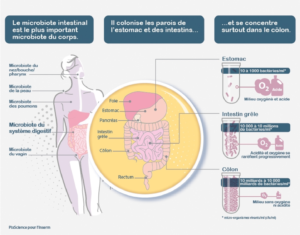 Functions of the gut microbiota

It is now known that the microbiota plays a role in digestive, metabolic, immune and neurological functions.

The microbiota participates directly in digestion by fermenting non-digestible residues and synthesizing vitamins K, B12, B8.

It also contributes to the functioning of the intestinal immune system: for example, Escherichia coli fights the establishment of pathogenic bacteria by preventing their binding in the intestine and by releasing toxic substances such as bacteriocins.

Gram-negative bacteria in the microbiota have lipopolysaccharides (LPS) that cause a local reaction of intestinal macrophages resulting in local inflammation and cytokine production. The latter then cause an increase in the permeability of the intestinal wall. The LPS then leave the intestine to trigger a possible broader inflammatory reaction in other tissues.

Function in cancer and cancer treatments

A number of data suggest that some tumours are linked to the presence of specific microorganisms in the microbiota, or to dysbiosis (imbalance of the microbiota) at the intestinal level. On the other hand, the microbiota is able to intervene in synergy with certain anti-cancer drugs by increasing the immune response.

Two hundred million neurons provide intestinal motor skills, but more than 80% of them carry information from the intestine to the brain: this is why it is often said that the enteric nervous system is the second brain! There are many indications that this system may be involved in neuropsychiatric diseases such as autism, schizophrenia, anxiety and depression or bipolar disorders.

Therapeutic approaches to modify the composition of the microbiota?

Diseases triggered or maintained by dysbiosis could be treated by several different therapies: feeding (fibre supply), antibiotic treatment against harmful bacteria, probiotics (beneficial living microorganisms), prebiotics (dietary supplements necessary for the growth of intestinal bacteria) or both, fecal transplantation by implanting a normal microbiota in a sick patient (this technique is successfully used in the treatment of Clostridium difficile infections).

Military personnel deployed in different regions of the world and particularly in developing countries often suffer from gastrointestinal diseases due to exposure to environmental bacteria that colonize the intestine where they cause dysbiosis.

Acute enteric infections and diarrhoeal diseases – also known as non-combat-related diseases – affect about 30 per cent of combatants during their deployment to areas where there is poor hygiene and contaminated food. They lead to a loss of working days, reduced performance and lower health care costs.

One way is to administer cross-reactive antibodies to the soldier to neutralize the toxic proteins of non-commensal bacteria, thus creating a kind of shield inside the intestine.

It has been shown that vaccines can also be very useful, especially vaccines against Campylobacter and E. coli enterotoxinogens.

The impact of microbiome on vaccine efficacy

It has been clearly demonstrated that there is a strong link between the composition of the microbiome and the efficacy of some vaccines. For example, a higher relative abundance of Firmicutes is associated with higher humoral responses to oral vaccines. Another example is flagellin, a bacterial protein that is abundantly present in the intestine, which is necessary to stimulate the production of antiviral antibodies following vaccination against influenza. It is obvious that the microbiome and the humoral immune response develop in parallel

The U.S. Department of Defense recognizes the importance of these reports and is closely involved in the development of high-efficiency vaccines that work in synergy with the microbiome to protect military personnel from high-risk pathogens.

Fortunately, the microbiome can be modified using a fibre-rich diet to increase resilience to military stressors such as lack of sleep, exposure to extreme environmental conditions and prolonged physical activity. The diet will be the subject of future U.S. military studies on inflammation, innate immunity and intestinal permeability.

The intestinal microbiome is a very complex dynamic entity involved in multiple aspects of human physiology, including the influence on the efficacy of certain vaccines. Poor intestinal health is closely linked to a multitude of pathological conditions, such as enteric infections and intestinal permeability, which can have a significant impact on the health and performance of fighters. Regular consumption of probiotics and nutritional prebiotics with synergistic effects can help to mitigate the health consequences associated with military stressors, although further work is needed to establish the effectiveness of this approach. In the future, synthetic biology and genetic engineering could provide a new way to manipulate the intestinal microbiota and advance efforts to improve the health of combatants on and off the battlefield.