What is the problem?

How to evacuate a victim contaminated by a chemical in an absolute emergency?

This question can be asked either in a military context when a group of combatants is under fire from conventional weapons and chemical agents (chemical warfare agents or ICTs), or in a civilian context in the case of, for example, a terrorist act with the release of toxic chemicals (such as the Tokyo Sarin gas attack).

Carole Dougnac, Product Manager at Ouvry, has studied the problem well and presented her work in her “Thesis for the University Diploma” Sciences and Technologies Public Health and Social Sciences, Health Risks Radionuclear, Biological, Chemical and Explosives ” Option C: Development and evaluation of a contaminated chemical victim extraction bag “.

We will summarize here his bibliographical study which is very complete.

It is not possible to transport potentially contaminating people such as the injured in Tokyo, for example, in an aircraft without protection, as contaminants can upset the pilot.

3_ In many cases, pre-hospital care required to maintain vital functions is necessary. Then specific means of transport for infected patients are required for transport to the hospital. Martin AJ, Lohse CM, Sztajnkrycer MD.A descriptive analysis of prehospital response by Hazardous material events. Prehospital and disaster medicine, 2015; 30:466-471.

4_ Ambulance transport of contaminated patients was considered by Shin et al. with the lining of the vehicle interior with a polyane sheet. Shin DM. Prevention and decontamination of chemical, biological, radiological, and nuclear contaminants for the emergency medical personnel during ambulance services.  Hanyang Med Rev 2015 ;35 :146-151.

As a result, the transport of a contaminated injured person poses at least 2 problems: he must not be responsible for secondary contamination

The system that answers these 2 questions could be a bag to wrap the injured person with the following functional requirements:

contain the victim’s chemical contamination (liquid and vapor);
reduce contamination inside the bag;
allow emergency medical procedures to be carried out;
reduce logistical and maintenance constraints;
remain in compliance with the regulations and directives in force. 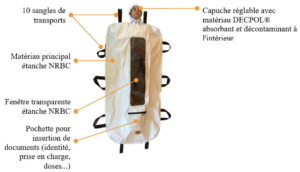 A zipper with a filter media ensures the absorption of vapors present in the bag as well as self-decontamination.

The airways are directly accessible and the system is compatible with the various CBRN masks including NH15 escape hoods.

Cable ducts allow the infusion hoses to pass through while maintaining the tightness of the bag.

The patient undergoes emergency decontamination (undressing, DECPOL…) before being cared for by caregivers who stabilize his vital functions. The infusion tubes can be held during transport by means of cable glands.

The benefits of the transport bag: confines the contaminated victim, helps to reduce the level of liquid and vapor contamination, does not require a consumable (no battery, fan or cartridge…) allows medicalization (airway, intravenous infusion…), compatible with the means of transport (stretcher, cervical collar, helicopter), light and decontaminable.

It therefore has its place in the military context in field operations, for example, and in the civilian context in the context of a CBRN attack where it can be used profitably by the fire brigade to transport the victim in absolute emergency to the hospital with an emergency service equipped with a decontamination chain at the entrance.

It can also be found in nuclear power plants and factories handling chemicals to transport victims of a contaminated accident building to the uncontaminated infirmary, before being taken care of by the fire brigade.

Congratulations to Carole for this very nice work !