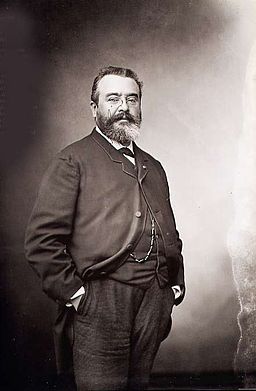 At a time when containment is being debated, I would like to talk to you about Adrien Proust? The story goes that Adrien Proust is certainly less well known than his son Marcel (“in search of lost time”), or even his wife Jeanne Proust, a loving mother who played a key role in her son’s literary accomplishments.

But then, why talk about Adrien Proust?

This young doctor defended his thesis in 1862, and was suddenly confronted in 1866 with the fourth cholera pandemic. He treated a very large number of patients and decided to devote himself to the fight against contagious diseases. From August to December 1869, he was sent on a mission to Russia and Persia to try to understand how epidemics are transmitted. He then wrote an essay on international hygiene, its applications against the plague, yellow fever and Asian cholera, [with a map showing the course of cholera outbreaks], G. Masson (Paris), 1873.

He travels a lot in Persia and Egypt in order to trace the route of new outbreaks. He records outbreaks of plague in particular, and is particularly interested in the spread of infectious diseases during the pilgrimage to Mecca. In 1877 he published his “Treaty of Public and Private Hygiene”.

Trained as a neurologist, he specialized in hygiene around the age of 40. He was appointed Inspector General of International Health Services from 1874 to 1903. Indeed, convinced that hygiene reduces the spread of infectious diseases, he relied on this science to serve as a tool at international meetings to prevent outbreaks. He represented France and was often in opposition to the British, who dominated world maritime trade at the time and whose ships he knew well that it was their ships that spread cholera, yellow fever and the plague. He wanted to impose on the British and the Ottomans a real sanitary control that all refused to stop the trade that relied heavily on the road to India. The various states are struggling to think collectively the fight against the outbreak, so much the commercial interests of each country seem to prevail.

He also worked a lot on hygiene in maritime transport.

He promotes outdoor living, sunshine, ventilation of apartments and a healthy and balanced diet. No one is a prophet in his house since his son Marcel lives at night, locked up, curtains drawn on closed windows and feeds mainly on croissants. He scrupulously applied his mother’s advice to lock himself up in his room and cover himself to cure his asthma. Terrorized by germs, he had his mail disinfected with formaldehyde before reading it.

Adrien Proust claimed, with good reason, that he never contracted any disease thanks to 2 behaviors: he kept his distance from his patients (social or physical distancing) and he washed his hands and face after each of his consultations. We remember that Louis Pasteur never shook hands with his guests and when he had to, he systematically washed them.

The notion of ” sanitary cordon “.

Everybody knows the dramatic consequences of the ship “Le Grand Saint Antoine”, which did not respect the rules of the normally obligatory “quarantine” in 1720 when it returned from the East, loaded with fabrics and on board of which there had been cases of plague. There were 30,000 and 40,000 deaths out of a population of 80,000 to 90,000 inhabitants, then throughout Provence, between 90,000 and 120,000 victims out of a population of about 400,000.

In 1821, France closed its border with Spain to prevent an outbreak of yellow fever in Barcelona from crossing the Pyrenees. The term “sanitary cordon” was then used even though the primary objective was to prevent the passage of liberal ideas from constitutional Spain to the France of Louis XVIII!

In the “Decennial Table of the Bulletin of Laws” we can read for the year 1822 “Order to repel by force any ship, any individual, who would try to cross a cordon sanitaire”. The notion of ” sanitary cordon ” appears again. It was Adrien Proust who theorized and accentuated this notion of cordon sanitaire a few decades later. In 1874, during a conference in Vienna, he defended the idea of a cordon sanitaire intended to protect France thanks to a chain of lazarets henceforth reserved for declared patients.

Lazarets have been known since the 15th century. They were establishments where sanitary control was carried out, followed by the quarantine of passengers, crews and merchandise coming from ports where the plague was rampant. First established in ports, Venice, Genoa…, their construction was generalized to other large cities, Milan, Berlin… Adrien Proust has studied the lazarets from Frioul to Marseille and for which he made a complete report.

He was a supporter of systematic containment, “rigorous sequestration, the interruption of communications by land or by sea have succeeded in preserving certain places or countries”.

Adrien Proust, who had studied the outbreak phenomena well, maintained that quarantines “close to the starting point of the disease” are “of unquestionable usefulness” but that prescribed too late they are “of doubtful effectiveness and can even become harmful”. It is not for nothing that the WHO, on January 30, 2020, advised States to “detect the disease early, isolate and treat patients, trace contacts and reduce social contacts”, while there was still time…

He contributed to the law on the protection of public health, carried by the Pierre Waldeck-Rousseau government and passed in 1902. His principles met with opposition from senators who saw an infringement on the freedoms of the public..

He will not know, in 1907, four years after his death, the creation of the “International Office of Public Hygiene” (OIHP) created in Rome.

The OIHP is at its creation composed of 13 nations, its official language is French and its headquarters are in Paris. Its function is to ensure the surveillance and control of plague, cholera and yellow fever. After several developments, it gave birth to the World Health Organization (WHO) in 1948.

Adrien Proust had already put his finger on the dilemma “to privilege the globalized economy or health? “This duality is still very present during this coronavirus crisis! and the consequences of the choice of economy have been very visible: Great Britain at its beginning, the United States…

As we have already had occasion to say :

It has been known since the Manchurian plague that wearing a mask alone can stop infections transmitted by bronchial secretions (pulmonary plague, flu…);

it is known that rapid and strict containment prevents the disease from progressing.

So why do you always want to reinvent the wheel?