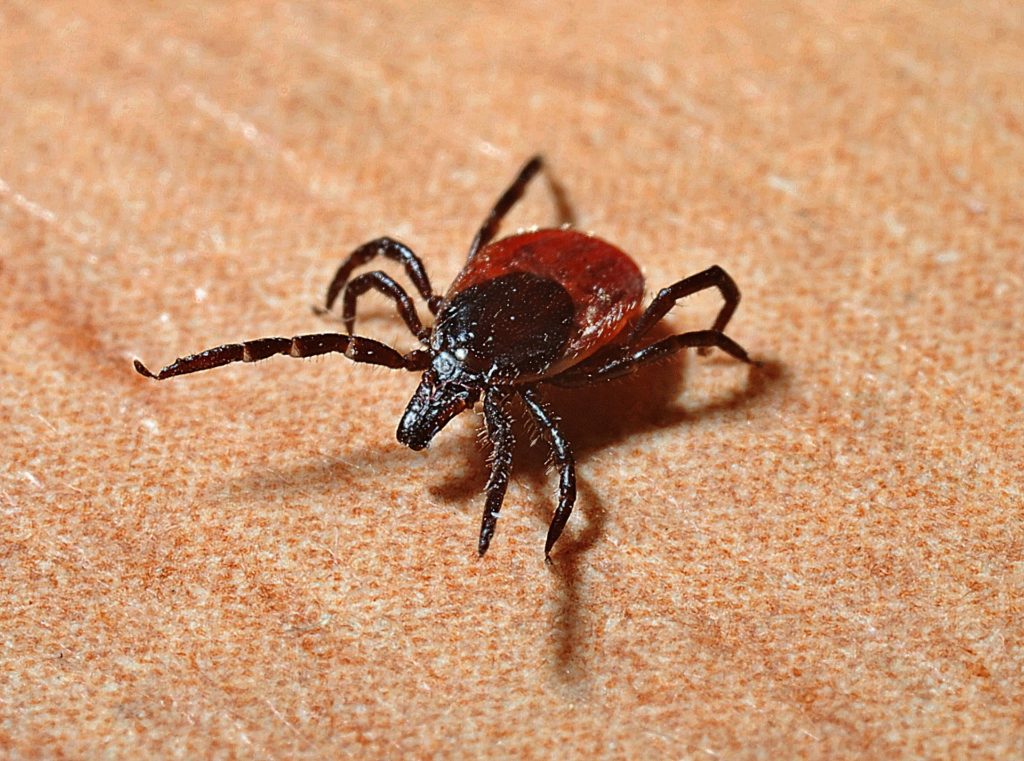 Recent discussions on social networks suggest that Lyme disease could be the result of a Pentagon experiment that turned out to be wrong!

This is an opportunity for us to take an overview of this disease that still deeply divides the medical community. In a second step, we will try to show whether it can be considered as a biological weapon.

The cutaneous symptoms of the disease were observed from the end of the 19th century and the beginning of the 20th century in the form of an extensive circular cutaneous erythema later called “migrant erythema” following a bite of a tick of the genus Ixodes. It was then shown that neurological manifestations could be associated with it as well as arthritis, particularly of the knees.

It was in 1977 that a real epidemic was described in 3 municipalities in Lyme County in the United States. Skin manifestations, arthritis and geographical correlations of the distribution of Ixodes ticks show that the tick is the main vector of Lyme disease.

It was the American researcher Willy Burgdorfer who identified “spirochete” bacteria in the intestines of ticks and the presence of antibodies corresponding to these bacteria in the sera of patients with Lyme disease. Isolated a little later, this bacterium was given the name Borrelia burgdorferi: spirochetes are particular bacteria that are equipped with flagella, which, unlike other bacteria, are not located in the external environment but remain enclosed in the bacterial wall. They are responsible for mobility by creeping.

Currently, a new taxonomy tends to distinguish a new genus “Borreliella including the bacteria responsible for Lyme disease (B. burgdorferi, B. afzelii, B. garinii...) and the genus Borrelia whose species are responsible for recurring fevers (Borrelia recurrentis…).

It is a disease transmitted by a vector, ticks of the genus Ixodes and in particular I. ricinus. The disease is present in all French departments and throughout the year, with a peak incidence from May to October. With 50,000 new cases in 2016 it appears that there has been a significant increase compared to previous years (30,000 annual cases in general). Limousin and the Far East are much more affected than the other regions of France.

The almost exclusive method of contamination is the use of Ixodes tick bites.

At the puncture site, in 80% of cases, migrant erythema (EM) occurs, i.e. the formation of a red dot that spreads very slowly, reaching 40 cm in 6 months, sometimes with a “target” appearance. EM disappears spontaneously within a few weeks. 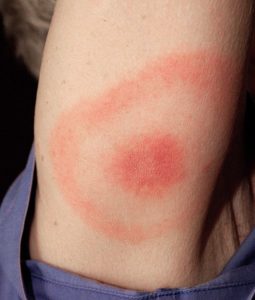 The early disseminated phase corresponds to the passage of the bacterium in the blood to the deep target organs. Neurological manifestations then occur due to damage to the cranial nerves (e. g. facial paralysis of the child). Cardiac manifestations are rarer, unlike arthritis, which frequently appears 2 to 6 months after the bite.

The passage of bacteria into the blood can be accompanied by fever, chills, severe fatigue, headaches, and muscle aches.

Direct diagnosis (detection of the bacteria) is extremely difficult to carry out and is only carried out in specialised laboratories. Indirect tests that detect the presence of antibodies in the serum (indirect diagnosis) should be interpreted with care. The primary test is the ELISA test. In the event of a positive or doubtful result, a western-blot or immuno-blot or dot-blot immunoprint test is used to confirm the result.

The active antibiotics are beta-lactam antibiotics, cyclins and macrolides.

Ticks are haematophagous. They need a single blood meal on 3 different hosts at each of its 3 stages of development: larva, nymph, adult.  The meal lasts from 2 to 15 days and the tick can multiply its weight by 600 ! They wait perched at the top of the tall grasses for an animal to pass by to cling to them (mammal, bird, reptile, man). Blood sampling is done by a succession of suction and saliva injections. It is considered that there are between 0 and 20% of ticks contaminated by Borreliella and that a contaminated tick only transmits the disease in 15% of cases and only 2% if the tick is removed before 4 days of fixation. If the tick is removed before 17 to 24 hours, the probability of transmission is practically non-existent.

The first picture shows a tick after his blood meal and the second a tick positioned on a grass. 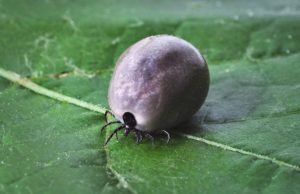 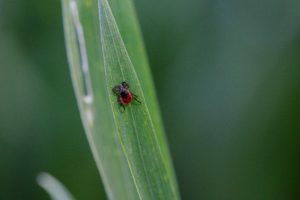 Preventive measures before a walk in the forest include wearing long clothing (including socks) that does not allow the skin to appear, using an anti-insect product and carefully examining the skin after a shower. If a tick is present, it must be removed with a “tick puller” whose rotational movement reduces the fixing capacities of the small spines of the rostrum, and therefore reduces the resistance to withdrawal.

Lyme disease is recognised as an occupational disease.

The difficulty of diagnosing Lyme disease in the late stages leads to very many problems, especially in patients who are convinced that they have contracted the disease and that nothing is being done for them. Some doctors believe that many ailments would be wrongly justified by Lyme disease. Others believe, on the contrary, that Lyme disease is very much underestimated and that many chronic diseases could be explained by undiagnosed Lyme disease. The latter recommend long-term antibiotic treatment.

Under these conditions, patients feel like they are being tossed around in a medical world unable to solve their problems: who among us does not know someone who is convinced that the pain they are suffering from may be the result of a poorly diagnosed Lyme disease?

Much research still needs to be done and in particular the development of reliable direct diagnosis.

The articles currently circulating on the Internet support the idea that Lyme disease was thought to have originated from the release of militarily contaminated ticks in the 1950s by an American laboratory, the Plum Island Animal Disease Center located 15 km from Lyme, where Lyme disease was first diagnosed. This hypothesis is based on the writings of Kris Newby in his book “Bitten: the secret history of Lyme disease and biological weapons” published in May 2019 but which no scientific support is able to support. This follows another 2005 conspiracy theory by Michael Carroll in “Lab 257: the disturbing story of the government’s secret plum island germ laboratory“.

Why is this not possible?

As we have said, the first descriptions of Lyme disease date back to the late 19th century and not to the 1950s. In addition, molecular biology methods have shown Borrelia genomes on a 5,000-year-old alpine mummy! The bacterium therefore had a pathogenic power before the 1950s and 1970s.

Can Lyme disease be used as a biological weapon?

the tick does not move itself (it only runs a few meters!) and must wait patiently perched on its grass blade until a host passes within its reach to hang on to it and make its blood meal;
its evolution is slow because it must undergo 3 transformations with 3 blood meals to pass from larvae to nymphs then to adults, and over a period of 2 years;
the contaminating bacterium is not transmitted from a tick to its offspring;
Borreliella is not transmitted directly from one human being to another but only by tick bites, the transmission efficiency of which is practically null if the mite is extracted in the first few hours;
severe clinical signs, when they exist, are very late;
bacteria are sensitive to antibiotics.

So we can do better as a biological weapon!

Lyme disease is still largely enigmatic. The pathogenicity of Borreliella is not well known and the late effects of the disease are not specific. The medical community is divided. Consensus meetings are held one after the other without solving problems.

Patients, with or without Lyme disease, are lost and often complain.

Under no circumstances can this disease be militarised.

The resurgence of fake news, even if apparently justified by a Republican representative from New Jersey asking the US Department of Defense to open an investigation, should not be reported by French newspapers without a minimum verification of the information. There is no need to add anxiety to patients’ concerns.