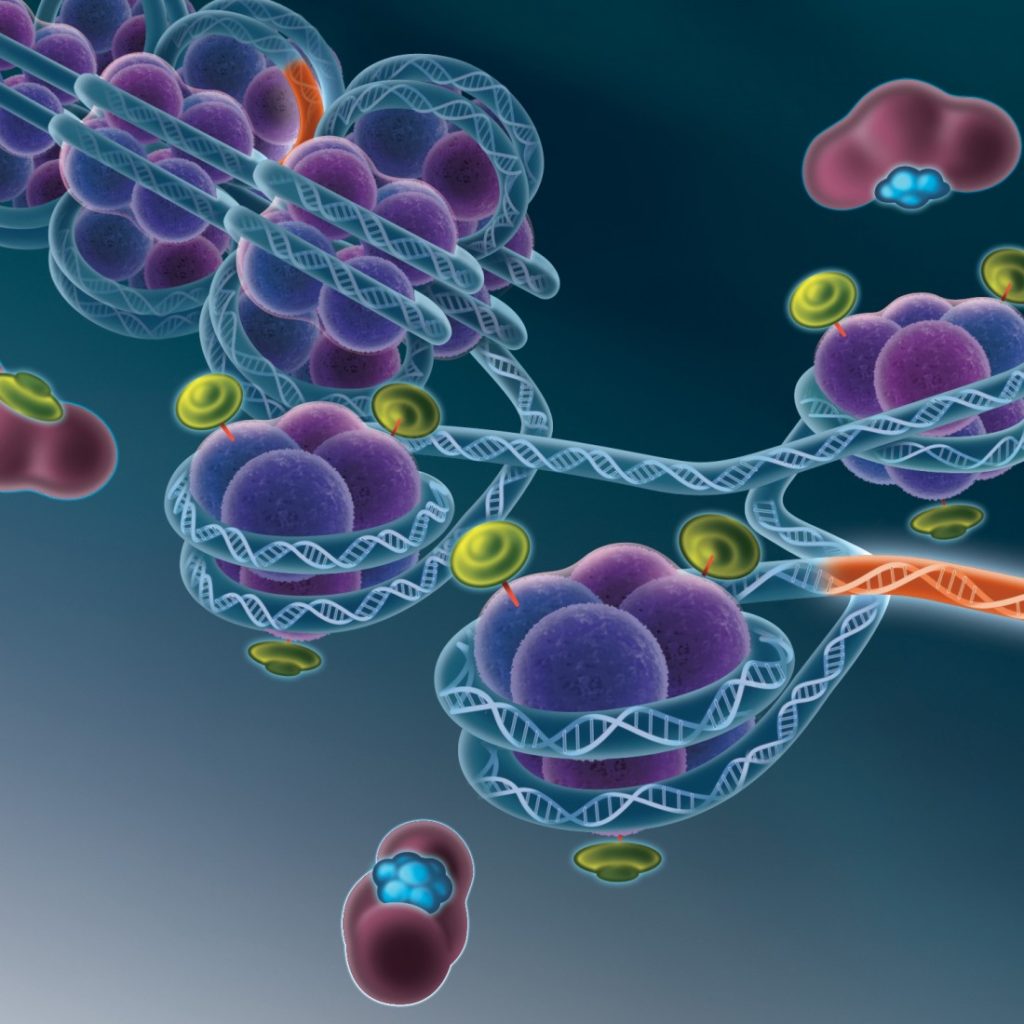 Recent scientific publications show that mustard gas and organophosphates can cause epigenetic changes: we found it interesting to study this problem in order to better understand it and the consequences in terms of pathogenicity. These phenomena are especially important because they also seem to be implicated in the “Gulf War Syndrome”, which is not yet fully understood.

All the cells of a living organism have the same genetic heritage. So how do you explain that some cells can be liver cells, others skin cells, even nerve cells! How can we explain that some bees gave queens and others workers? This can be explained by the differentiated expression of genes, in relation to the external environment, by epigenetic phenomena. Remember that in a genome, only 10 to 20% of genes are active which allows a great diversification of activities

In evolution, the Darwinian theory shows that the evolution of species is achieved by the modification of the genome by a mutation for example, the new individual being preserved if an advantage has been attributed to him by the mutation. While in Lamarkism, it is the external environment that guides the transformation of individuals (the giraffe has acquired a long neck to eat the leaves of trees located high up).

Since epigenetics was discovered in the 1990s, the dogma of Darwinism has fallen, while Lamarckism has come back to the front of the stage.

For example, the size of men increased by 15 cm in 1 century (when I started my teaching career, the students were more or less my size. During my last year, everyone exceeded me by at least 1 head (boys and girls). This resulted in very different athletes 40 years apart: Florent Manaudou 1.99 m for 99 kg, compared to Michel Platini 1.79 m for73 kg! There is indeed an influence of the external environment due to the epigenetic phenomenon. Men’s height and weight increase as a result of the surrounding environment and lifestyle. The new characters are transmitted (Lamarckism).

A laboratory experiment has shown that new traits can be transmitted: mice subjected to significant stress have given birth to individuals stressed in the absence of the stressful phenomenon, and this, over 2 generations. After that, the character was lost.

According to Inserm’s definition, epigenetics corresponds to the study of changes in gene activity, not involving modification of the DNA sequence and which can be transmitted during cell divisions. Unlike mutations that affect the DNA sequence, epigenetic changes are reversible.

How does epigenetics work?

Genes themselves are not modified, it is their expression that is regulated by the environment.

Some hereditary syndromes also result from mutations in genes coding for epigenetic machinery, as in the case of combined immunodeficiency syndrome (ICF). Furthermore, the role of epigenetics is suspected in the development and progression of complex, multifactorial diseases, such as neurodegenerative diseases (Alzheimer’s, Parkinson’s, amyotrophic lateral sclerosis, Huntington’s, etc.) or metabolic diseases (obesity, type 2 diabetes, etc.). Numerous epidemiological studies also suggest the existence of links between various exposures during intrauterine life (or even as early as fertilization) and the onset of chronic diseases in adulthood.

In some cases, labelled DNA can be transferred to the next generation. However, in the vast majority of cases, there is a kind of “wiping” of the labels at the time of meiosis to give back to the descendants the DNA normally regulated in its expression.

In another study (Simons et al.) showed that mustard gas had little effect on histones but caused a significant increase in DNA methylation on isolated cells and skin cells.

It is estimated that between 25% and 32% of the 900,000 Gulf War Veterans (1990-1991) have symptoms of “Gulf War Syndrome”. It is manifested by a whole panel of very disparate symptoms: neurological, psychological, muscular, respiratory or dermatological disorders. Nervous symptoms predominate such as behavioural problems, memory problems and depression. There are neuroimmune and neuro-inflammatory abnormalities. Brain tumours have also been described. The vaccines received by the soldiers before their departure were implicated, causing them to synthesize anti-squalene antibodies (although absent from the vaccines). This approach to vaccines seems to be abandoned.

However, exposure to pyridostigmine bromide found in tablets prescribed to soldiers to protect them from poison gas was considered.

In a recent paper published by Ashbrook et al. it is shown that mouse cells exposed to cortisone (stress hormone) and then to diisopropyl fluorophosphate (DFP) a sarin gas simulant (irreversible acetylcholinesterase inhibitor) alters histones and DNA methylation of genes involved in neuronal inflammation and cognitive symptoms. It is therefore quite likely that the intense stress of soldiers and exposure to organophosphates may be, at least in part, responsible for the symptoms of Gulf War syndrome, including cancers that develop later.

The cause of the syndrome is therefore not psychological.

War toxins such as mustard gas and organophosphates act directly on the body through their toxicity, but also they act more durably by modifying gene regulation using epigenetic markers. Knowledge in epigenetics brings new elements in the understanding of long-term pathological effects: HD and organophosphates are capable of placing “labels” on DNA and histones, durably modifying the expression of certain genes but not their structure.