One bag may hide another: the evacuation bag, the CBRN patient transport stretcher, the CBRN body bag.

When a CBRN event occurs and there are casualties, the problem of transporting victims arises.

At the same time as first aid must be administered, care must take into account the fact that these victims can contaminate their surroundings and cause cross-contamination, the dramatic consequences of which could be measured during the sarin gas attack in Tokyo in 1995.

What are the solutions to transport these injured people in good conditions, allowing them to receive emergency medical care (perfusions…) while protecting the external environment and particularly caregivers from secondary contamination?First, we will lay the foundations for the evacuation and transport of chemically contaminated victims in surgical emergencies, whether in the military or civilian field. We will then look at the proposed solutions.

Let us place ourselves in the case where a group of combatants, on national territory (TN) or in external operation, is attacked both with conventional weapons (explosion, exchange of fire…) and chemical warfare agents (or Chemical Industrial Toxics (TICs).

Some of the victims are both injured and contaminated. The dogmatic approach is that decontamination takes priority over injury management (PEC). But, in the event of an Extreme Emergency (EU), the victim must be able to benefit from both field care (damage control) and rapid evacuation to a surgical facility. But, without thorough decontamination, the evacuation could generate a transfer of contamination to the transport vehicle – helicopter, armoured vehicle (VAB)… – and to the caregivers.

The figure below illustrates the care chain for a contaminated wounded soldier and the various associated transports. 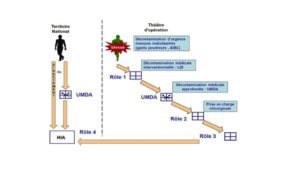 In the context of a terrorist attack involving chemical materials, Circular 700 of 2 October 2018 allows the possibility of transporting an invalid symptomatic victim (in absolute or relative emergency) to a suitable structure in the context of a surgical emergency, without thorough decontamination before transport.

If necessary, when a serious victim who cannot quickly undergo decontamination in the field is cared for and with the agreement of the Director of Medical Rescue (DSM) and the SAMU, a victim may be evacuated to a fixed Hospital Decontamination Unit (UFDH) for disabled victims in a designated health facility (ETS), previously alerted and equipped with this capacity”. The instruction relating to the preparation of exceptional situations such as multi-site attacks of 4 May 2016 specifies that “certain predetermined establishments are likely to receive exceptionally and after regulation a limited number of regulated EU citizens not previously decontaminated and must prepare accordingly”.

In a recent article, we studied the evacuation of a contaminated victim in a surgical emergency.

This new chapter will focus on the comparison of the 2 devices proposed by Ouvry®, adapted to the different field conditions. The body bag will also be discussed.

In the context of a chemical event (on national territory or in external operation), it is sometimes necessary to extract an invalid victim in absolute emergency to transport him/her to an adapted hospital structure that can take him/she into care. The contaminated victim extraction bag is designed to transport the victim without contaminating the transport vehicle or medical personnel, while allowing emergency medical procedures to be carried out.

Its main advantages and features are as follows:

Helps to reduce the victim’s level of liquid and vapour contamination: thanks to an activated carbon microbead filter medium that adsorbs chemical vapours, and a DECPOL technology material that absorbs and destroys liquid contaminants.

No consumables or maintenance required: no battery, no fan, no cartridge…

Allows medicalization of the victim: access to the airway, infusion placement, emergency access routes to stabilize the victim.

Is compatible with the means of transport: stretcher, hoisting, cervical collar installation….

Its 70x50x40 cm packaging and its weight of less than 2.5 kg make it easily transportable in the field, which is a great asset.

Its simple design allows the patient to be removed from the danger zone and stabilized. For more complex tracking or long-distance transport, the CBRN patient transport stretcher described below can be used. 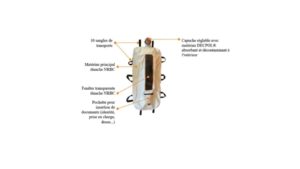 The contaminated patient transport bubble is specially designed for transporting CBRN contaminated casualties to a medicalization area, while allowing emergency medical procedures to be carried out.

This device is more complex than the previous one because the victim is completely confined inside the bag, the upper part of which is transparent for a good visualization of the patient. An optimized internal air distribution system is created by 2 airflow systems with  cartridges.  It is equipped with a support and protection system for the patient’s head. It allows contaminated, infected or uncontaminated patients to be transported and confined in a healthy or contaminated environment. It is equipped with integrated gloves, 7 tube passages with variable diameter (O2, intravenous, blood pressure…), and a waterproof closure. It is perfectly compatible with NATO stretchers.

This system ensures that the contamination is contained to avoid contaminating medical and transport personnel, the vehicle or aircraft used to extract the victim.

Constructed from mechanically resistant and CBRN-tight materials, the contaminated patient transport bubble is designed for rapid deployment and can be easily assembled once out of its packaging.

We have already mentioned the conditions under which a chemically or microbiologically contaminated corpse must be transported.

The CBRN body bag allows the containment and evacuation of CBRN contaminated bodies. It has been designed to avoid cross-contamination during the extraction and storage of bodies.

An internal cartridge allows the decomposition gases to be evacuated while filtering them. It can be frozen, incinerated and is perfectly compatible with scanner imaging.

Lightweight and compact, its implementation is fast and intuitive.

It is made up of:

An absorbent material is placed inside the bag to absorb up to 8 litres of liquid.

Transparent pocket for materials and documents.

The body bag is different from a simple body bag because its material absorbs liquids and decontaminates both pathogens and toxic chemicals, so it does not generate cross-contamination when a body is placed on it. 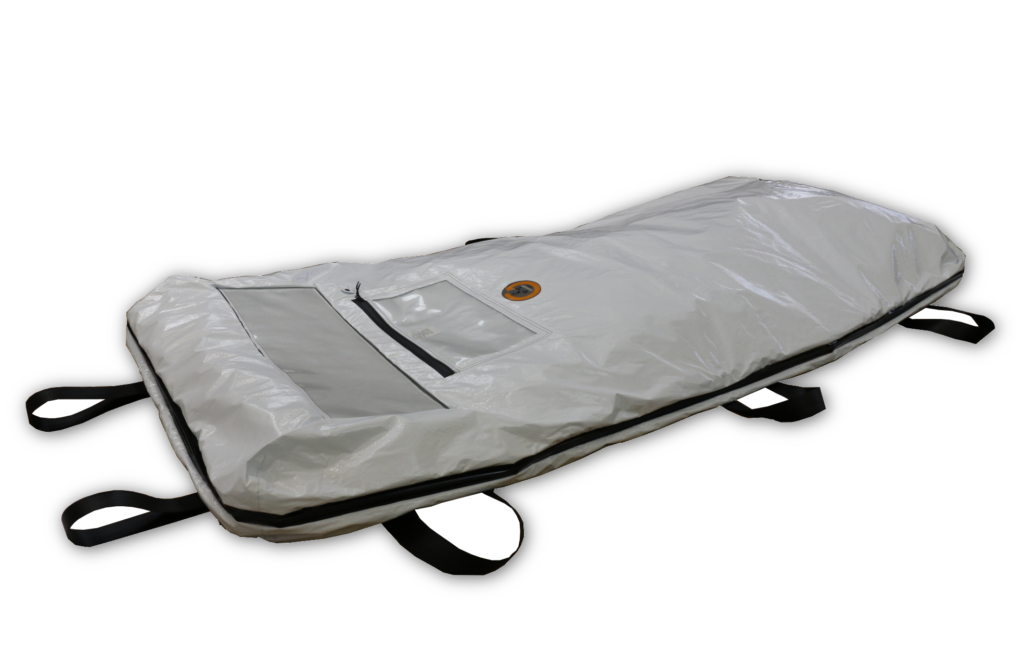 The extraction bag, by its availability in the field, makes it possible to provide first aid to seriously injured and contaminated victims and to transport them without the risk of cross-contamination to the most suitable reception point. The more complex design of the transport bubble will also make it possible to provide the victims with the necessary care and transport them under optimal conditions, even if they are chemically or microbiologically contaminated.

As for the body bag, it protects the external environment, materials or carers from harmful products that can be carried by a corpse.