At a time when we are rightly concerned about the evolution of bacteria towards greater resistance to antibiotics, we are seeing the reappearance of a method for fighting pathogenic bacteria, invented by Félix d’Hérelle.  The first tested humans were in 1919: phagotherapy is 100 years old.

A self-taught French-Canadian microbiologist born in Montreal on April 25, 1873, he deliberately follows a scientific career similar to that of Louis Pasteur. He first worked on fermentations for the production of whiskeys from maple sugar (in Canada) or bananas (in Guatemala), then industrially produced alcohol with the residues from the defibration of the “sisal” agave (in Mexico).

It also describes a bacterium responsible for epizootic diseases in grasshoppers: Coccobacillus acridorium. By infesting plants with this germ, it eradicates grasshoppers, a real scourge for agriculture.

It is then that he notices on some cultures on solid media of the germ, the presence of virgin spots as if the culture had been removed with a cookie cutter! Microscopic observation of the stain shows no elements.

In 1915, he examined the stools of Dragons hospitalized in Maisons-Laffitte for bacillary dysentery. It mixes the filtrate of a stool with a bacillus culture and after culture obtains virgin spots similar to those obtained with pathogenic bacteria cultures in the grasshopper. He also observes that it is the last stool before convalescence that gives the most virgin spots. He deduced that the “generator of virgin spots” is certainly responsible for healing. A few drops of filtrate in a liquid medium where bacteria develop make it clear, that’s clarification!

The bacteria are lysed by the bacteriophage and the medium becomes clearer.

The principle of healing. A parasitic microbe causes the disease, an infinitely small one in turn parasitizes the pathogenic microbe, eats it and the patient heals. This is the birth certificate of the “bacteriophage”. Félix d’Hérelle has obtained bacteriophages for the cure of dysentery, typhoid fevers, childhood diarrhea… 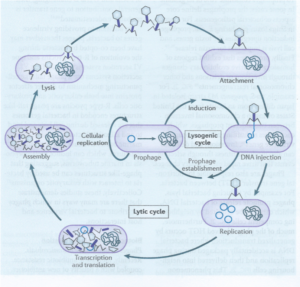 Lytic phage, a step lasts 30-60 minutes and produces about 100 phages.

The first healing in humans.

It was Professor V.H. Hutinel (1849-1907) of the Hôpital des enfants malades (Paris France) who first treated and cured a child with dysentery and then 3 brothers and a sister in a desperate state. The results published in 1921 were followed by the cure of hundreds of thousands of cases around the world.

Always an entrepreneur, Félix d’Hérelle created in 1923 with one of his students the Eliava Institute dedicated to phage therapy in Tbilisi. This Institute is currently the only institution in the world to hold a bank of 6,000 phages, providing various healing cocktails to Ukraine, Poland and Russia.

Frederick William Twort (1877-1950) described in 1915 (before Hérelle) the presence of “vitreous” areas on bacterial cultures in solid media. He has worked on a number of hypotheses (small bacteria, diastases…) but has not been able to treat infectious diseases with this product. To be absolutely correct, it is usual to say that “Twort discovered bacteriophages and d’Hérelle discovered phagotherapy”.

Until 1930, these were the glory days of phage therapy, but a few failures called into question the validity of this method.

In 1940, penicillin appeared as the miracle drug, stable, easy to use, effective… France manufactured bacteriophages in the bacteriophage laboratory in Paris (created by F. D’Hérelle in 1936) until the 1970s. In the 1980s, the Pasteur Institute’s phage collection was discarded….

The bacteriophage then becomes a molecular biology tool for the study of the genome (transduction).

The alarming finding of antibiotic resistance, older non-rigorous methodologies have led to misinterpreted failures and are being reassessed. Production safety and quality of preparations must be ensured

It is the use of lytic bacteriophages to treat a large number of infectious diseases of bacterial origin, particularly multi-resistant infections, without side effects.

A French company, “Pherecydes Pharma” is once again producing phages currently being tested on osteo-articular infections with Staphylococcus aureus at the Croix Rousse hospital in Lyon (Pr. Tristan Ferry). This treatment does not have a MA (Marketing Authorization) but the company has obtained a Temporary Use Authorization (TUA) to treat these patients on a compassionate basis.

A project (FP7) supported by the European Commission “Phagoburn” from 2013 to 2017 investigated the possibility of treating superinfections of burn victims with bacteriophages. Eleven centres were included in this study, including the “Service de Santé des Armées” at HIA Percy, which is very advanced in this field. The encouraging results have been published

Phage therapy, a method of the past but also a method of the future, is currently facing regulatory obstacles. Its advantages are: species specific, no cross-resistance with antibiotics, few and mild side effects. Its disadvantages are: the preparations may contain dangerous genes, the specificity is narrow, the indications limited. As for the risks of resistance of bacteria to bacteriophages, they are not negligible.