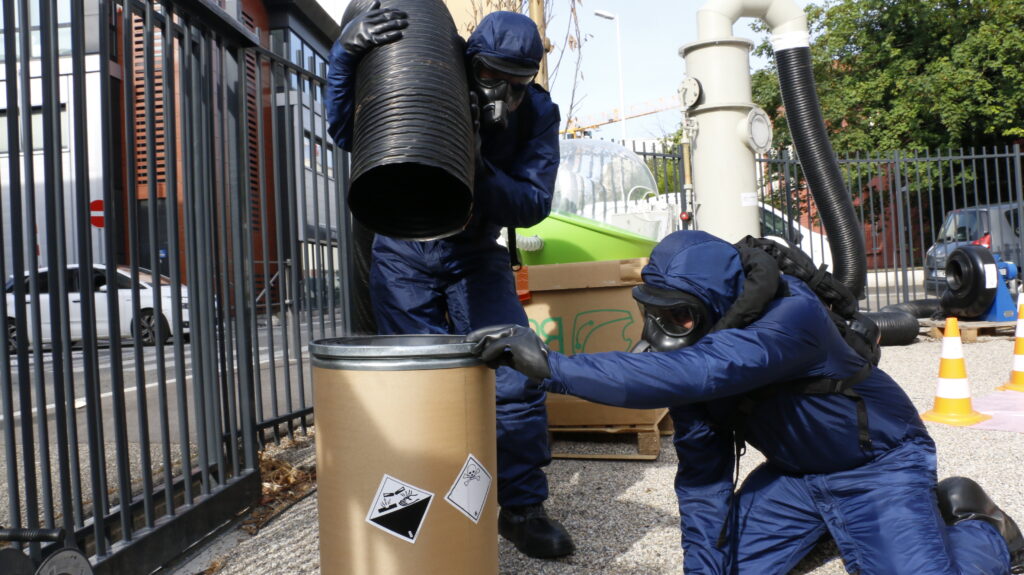 An interesting article by Dai Xuezhi and Xu Jingkai shows us a prospective analysis of protective textiles against chemical hazards just published in E3S Web of Conferences 267, 02072 (2021) ICESCE 2021 (1)

As regards protective clothing, he reminds us that the outer layer is hydro and oleophobic in order to repel aqueous and organic products. The constitution of certain fabrics allows air to pass through the surface while allowing sweat to escape to the outside, resulting in cooling of the skin: an effective evacuation of heat is then achieved, which reduces the risk of heat stroke. The additional contribution of an activated carbon underlayer traps the toxic vapors that have penetrated while the toxic products introduced by “pumping effect” are retained on the inner face of the garment before they spread on the skin. Moreover, the air permeability on the whole surface of the body distributes the pumping effect on the whole body leading to a dilution of the toxic products before they are trapped by the carbon, whereas for completely impermeable garments without carbon, the toxic products are concentrated in large quantities at the interfaces only, exerting their deleterious action there.

A water- and oil-repellent surface, an air passage and a carbon layer are the characteristics of Ouvry’s PPE such as the Polycombi ®.

2°) The materials of the future

What are the possible ways of improvement ?

The detection of toxic products on the textile surface, their specific blocking on the textile, or even their destruction in situ could be possible avenues for the future.

The new materials on which research in the field of chemical protection is focused include mainly nanofibers and active nanoparticles, conductive polymers and catalytic materials based on biological enzymes.

We can speak here of nanoparticles, nanotubes, nanowires and nanocomposites.

Metal nanoparticles, such as Ag, Au, Pd, Cu, Ni, and metal oxide nanoparticles, such as MgO, CaO, ZnO, TiO2 , Al2 O3 , MnO2 , Fe2 O3 , etc., have been reported in many scientific publications due to their excellent catalytic properties, effective against chemical agents by absoption and decomposition (2).   Nanoparticles can be prepared by aerogel. Photocatalytic surfaces containing TiO2 have been developed, allowing the use of solar radiation to destroy toxicants and biological agents (Ouvry and the SELDEC project 2009-2011).

However, the modification of the textile fiber surface by metal oxides also has limitations. In coating the fabric surface, particle agglomeration is a real challenge because the particles may not stay on the fabric surface permanently. The fabric treated with nanoparticles will not only deteriorate the appearance of the fabric, but also reduce the flexibility and wear resistance of the fabric. Therefore, it is necessary to find an effective method to stabilize the dispersed particles.

Nanofiber is a thin material of nanometric diameter, usually produced by electrospinning. Textiles made of nanofibers have a higher air permeability and a better retention of fluids and aerosol particles which can give them potential applications of protection against chemicals and liquids penetration including toxics used in the agricultural field. The addition of functional compounds such as cyclodextrin, iodobenzoic acid, polyoxometalates, peroxides, oximes and chloramines can significantly improve detoxification performance. A new type of ceramic nanofiber developed by sol-gel with zinc titanate (ZnO-TiO2) was tested in protective clothing and masks against aggressive chemicals. The synthesized nanofiber has better porosity and decomposes simulants of nerve gases and mustard gas by adsorption and detoxification.

The electronic properties of these polymers are characterized by their reactions to various gases including organic vapors, acids and liquid bases.

Among the conductive polymers, polyaniline (PAni) is an attractive solution due to its chemical stability, high electrical conductivity, ease of synthesis, easy doping, low cost and transparency.  The oxidation form of PAni can be transformed from the insulating alkaline form (σ <10-10 S/cm) to the conductive salt form (σ >1S/cm) by acid or alkali doping and undoping. This fluctuation in conductivity can be used to develop PAni sensors for the detection of toxic industrial chemicals. By varying the oxidation state of the conducting polymers, PAni and PPY exhibit reversible changes in the optical absorption spectrum. There are many gas sensors using conductive polymers as sensing elements, which are characterized by high flexibility and the ability to detect deadly chemical gases by changing the light absorption thus the color of the compound. For example, studies have shown drastic changes in the UV-vis absorption band of conductive PPY films (a 40% decrease) after being exposed to DMMP.

Many enzymes can degrade various organic phosphorus compounds. By adding enzymes and polymers to various materials, self-cleaning surfaces can be developed for the design of chemical protective clothing.

Among these enzymes, Organophosphorus hydrolase OPH (phosphotriesterase) is active against organophosphorus pesticides as well as sarin, soman and to a lesser extent VX. Paraoxonase-1 (PON1) also hydrolyzes many pesticides and neurotoxins, in particular sarin and soman.

Numerous researches are in progress to include them in carriers while keeping them active.

The combination of new materials and technologies will be able to provide protective clothing with unique functions, including the ability to detect, inactivate toxicants and selectively block hazardous chemicals. In addition, enzyme-based polymeric materials can be used as highly efficient biocatalysts to develop advanced self-cleaning copolymers.