The explosive risk: CBRNe or CBRNE? 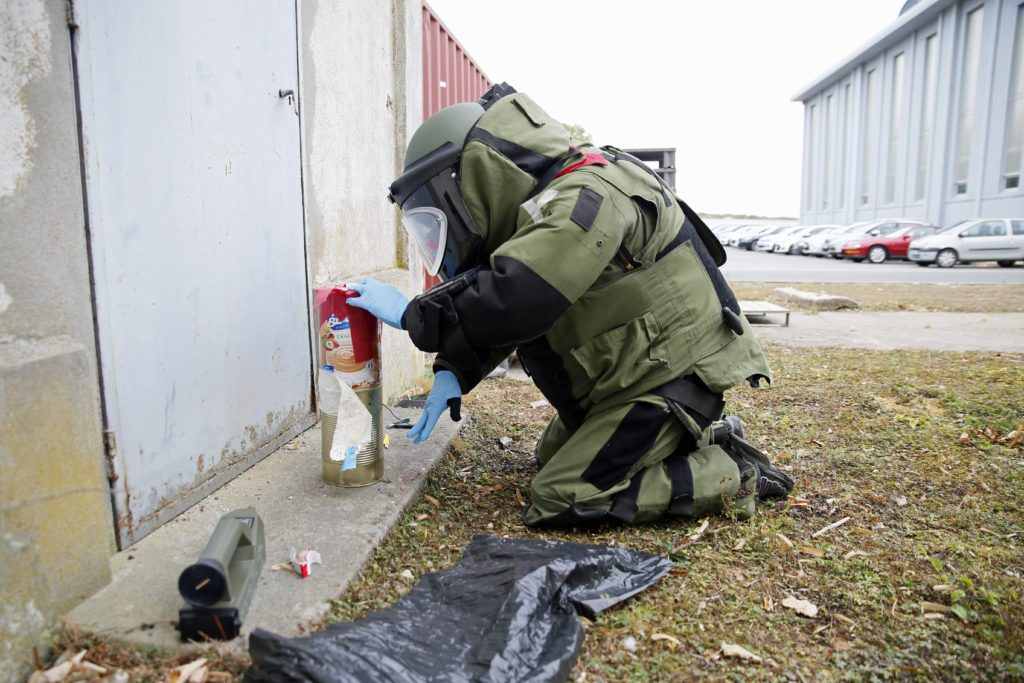 As already mentioned, the former acronym BCN (Bacteriological, Chemical, Nuclear) has evolved towards the acronym BCRNe (Biological, Chemical, Nuclear, explosive) to better reflect the paradigm shift, state threat vs. terrorist threat the “e” meaning explosive, considered as a vector for the diffusion of a BCRN agent. Given the evolution in the number of operational missions carried out on Improvised Explosive Devices, we can only observe that the number of explosive situations is increasing and that it may be necessary to think a little further, in order to change attitudes so that the acronymBCRNe becomes that of dangers, risks and threats BCRNE? The explosive “E” risk represents a threat in its own right.

This question is very well addressed by Captain Sébastien SICOT in his report “Approach and awareness of primary firefighters in explosive risk situations requiring the support of mine clearance services” (Specialised Master’s Degree in Risk and Threat Management N.R.B.C.E. 2016).

In the case of a fire, firefighters are confronted with the explosive risk (gas, fine particles suspended in a confined environment). However, explosive situations can exist other than fires, such as the explosion of a silo in Blaye (33) on August 20, 1997, or the explosion of the Lafayette course in Lyon (69) on February 28, 2008

There are many situations that can expose firefighters to explosions and they are multiplying, such as the development of hybrid bi-fuel vehicles, the development of new energies (hydrogen engines), the multiplication of pyrotechnic devices in vehicles (belt pre-tensioners, airbags, etc.), the transport, all modes combined, of hazardous materials, the storage of chemical products without respect for storage rules, industrial accidents, etc.)

– war weapons: every year 500 tonnes of ammunition are found in France, 15 tonnes of which are loaded with chemicals. They are handled by the mine clearance service. There are also weapons, ammunition and explosives. It is estimated that there are 15,000 weapons of war in circulation and 4 to 6 million weapons illegally held in France;

– accidental explosive accidents can occur in the case of strong acid-strong base mixtures or handling of picric acid, as well as black powder used by hunters and collectors of old weapons.

The First World War left millions of munitions buried in the northeast: nearly 30% of the one billion shells fired during the conflict did not explode. Between 1939 and 1945, German and then Allied bombardments targeted cities and strategic points (airports, ports, factories, etc.). Ammunition is discovered randomly through field work and development and construction projects such as highways. Approximately 500 tons of ammunition are exhumed each year in France. The destruction can be done on site and that is why heavy protections composed of steel and sand up to 24 tons for small shells and up to 700 tons for the largest bombs of the war 39-45. These protections, assembled on site for several days, allow the evacuation of a limited number of people within the area of action.

Most of the ammunition is handled by the 300 deminers of the Civil Security. The rest is treated by private companies such as Pyrotechnis, and Sita Remédiation, whose men are generally former military deminers.

Chemical bombs are not processed by private companies. They are stored (about 250 tons) in the SECOIA factory at the Mailly military camp in Aube. Each year, an additional 15 tonnes are recovered. The process is entirely robotic, the bomb is placed in a sealed box before being destroyed by explosives. The gases are neutralized and the residual waste recovered and treated.

Deminers are called whenever a suspicious package is discovered. Using a small remote-controlled robot equipped with arms and cameras, they pierce and then neutralize the suspect package.

Equipped with coveralls, helmets and detection devices to identify chemicals (gases, liquids, nuclear), they follow very specific protocols for which they regularly meet. Indeed, throughout their careers, deminers must be trained to adapt to the evolution of chemical weapons and explosive devices.

There are deminers and diving specialists on a boat such as a mine hunter or based on land within a group of deminers (located in Cherbourg, Brest and Toulon). They search for, identify and neutralize explosive devices detected at sea and in ports.

A military or civilian who has undergone specialized training to clear mined areas or territories during wars or troubled periods as part of defined humanitarian missions. The presence of minefields causes serious injuries that maim children and adults.

The National Centre for Training in Humanitarian Demining was created within the ESAG of Angers (École Supérieure et d’Application du Génie). It must respond in the context of maximum security to the numerous national and international requests from States and international organizations. It trains military personnel and various categories of personnel, acting for the benefit of humanitarian agencies or working in mine action operations: management of mine clearance programmes, training of instructors and supervisors.

It is obvious that SDIS will be confronted with more and more explosive situations in the future and that beyond the microcosm of CBRN-e specialists, all firefighters will have to face these new dangers, whether they are the result of negligence or malicious origin. The explosive risk must be better taken into account in research and development work on PPE and firefighters’ equipment and exchanges between SDIS and CIDs must be strengthened because they work in pairs during an intervention.

The explosive risks faced by firefighters are no longer just associated with a fire. Explosive situations are more and more numerous: accidental (gas, industrial accidents, gas vehicles, pyrotechnic devices, storage and transport of dangerous products, weapons of all kinds, civil explosives, incendiary devices, explosive belts and especially war devices. They are always in the front line and always accompany the deminer. Following Captain SICOT, we can say that “The explosive risk, like nuclear, radiological, biological or chemical risks, by its increasing occurrence and the seriousness of the balance sheet it can generate, deserves to finally obtain its nobility at the dawn of a century that is harboring many threats”. Changing the acronym BCRN-e or e would only represent an explosive risk carrying other products, into the acronym BCRN-E is not only a change of letter but also perhaps a paradigm shift involving better coordination between SDIS and CIDs.