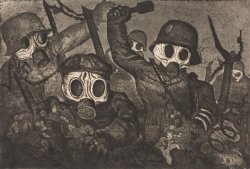 In this short article we recall the properties of the main products which are called “chemical weapons”.

In spite of the treaties prohibiting chemical weapons and their destruction, we hear every day about their use on operating grounds: chlorine regularly spread in Syria, sarin gas during the attack of 4 April 2017 on Khan Cheikhoun, Syria, Vx gas deposited on Kim Jong-nam’s face, a half-brother of North Korean leader Kim Jong-un, who was killed on 13 February 2017 at the Kuala Lumpur airport.

Developed during the First World War, chemical weapons can cause great damages to the adversary. Inexpensive and relatively easy to synthesize they could be produced by a large number of countries. The psychological impact of their use is so important that they can be frightening in the hands of terrorists as we saw with the attacks perpetrated by the Aum sect in Tokyo in 1995.

Liquid at room temperature they produce a vapor able to penetrate the skin, respiratory epithelium and cornea. The liquid form can be absorbed directly by the skin or the intestine when it contaminates food.

All neurotoxic agents act by inhibiting acetylcholinesterase, causing an accumulation of acetylcholine at the synapses level. Poisoning is manifested by diarrhea, vomiting, abdominal cramps which look like an eating disorder. The presence of myosis, hypersalivation, bronchorrhea (secretion of mucus in the lungs), bradycardia (low heart rate) and urinary retention suggest excessive cholinergic stimulation. Death occurs through asphyxia because of the atony of the respiratory muscles. There is a chronic poisoning leading to neurological damage.

Dichlorated ethyl sulphide or mustard gas, or yperite, is a yellowish liquid at room temperature and it vaporizes at 25 ° C. In the gaseous form it penetrates through the clothes. This alkylating agent reacts rapidly with proteins and nucleic acids. He is considered as an incapacitating agent, the injuries being generally not fatal: the mortality of the affected soldiers during the First World War was only 3%
The blister power is very important: a drop of 0.1 mL of pure yperite contains about 20 000 doses capable of causing a blister effect on the skin. Initially erythema appears, followed by a blister as in the case of burns. It breaks easily by releasing a yellowish liquid. Symptoms can sometimes appear 12 to 24 hours after contamination.
The sequelae are mainly ocular (chronic conjunctivitis, blindness …), skin (pigmentation, scarring, pruritus …), respiratory (bronchitis asthmatiform), psychic (depression, personality disorder) and genetics (radiomimetic effect on tissues, Hematopoietic tissue with possibility of medullary aplasia, which favors the process of teratogenesis and carcinogenesis).

Chlorine and phosgene (oxychloride of carbon) are the most representative of this group.
Chlorine is a gaseous substance of yellow-green color with a pungent and suffocating odor. There is no bronchial spasm when exposed to high concentrations but irritation in the nose, throat and eyes resulting in coughing and tearing with an evolution towards a burning sensation. There is a difficulty breathing (sensation of suffocation and gasping breathing) and retro-sternal pain. An initial constriction is observed, and a spasm in the larynx may lead to respiratory arrest.

Phosgene is gaseous at room temperature and is 3.5 times more dense than air. Its odor is that ofmouldy hay. The eyes are immediately irritated probably because of the release of hydrochloric acid following the hydrolysis of the product. Inhaled, it reacts with a large number of molecules by causing an increase in capillary permeability and influx of fluids in the alveolar spaces. Pulmonary edema is formed, and death occurs by asphyxation. Symptoms may be delayed, appearing only between 1 and 24 hours.

Classification according to persistence and lethality

An injection of atropine (dilating effect of the pupil), an oxime reactivating acetylcholinesterase and an anticonvulsive benzodiazepine.

There is no specific treatment for those injured by yperite. In general, they are considered to be immunocompromised burned. At the respiratory level: oxygen therapy, early intubation and tracheotomy in the case of edema. Superinfections should be prevented on the skin. Ophthalmologically: prolonged eye wash with physiological water.

There is no specific treatment. First aid will evacuate the victim to fresh air and rest kept warm. If necessary, oxygen and bronchodilators may be administered.

The BCRNe risks can be consulted by following this link
As can be seen, chemical weapons are still widely used, which implies that we must never lower our guard, develop individual equipment solutions that are available to both combatants and civilian, first responders and care providers in order to protect themselves from secondary contamination. The fear of terrorism with chemical weapons is very important and that is why knowledge of these products is always necessary.