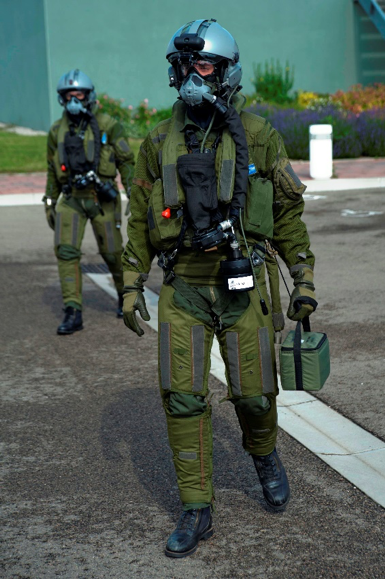 Some professionals require CBRN protection even though they are already equipped with PPE that specifically protects them in the performance of their job: this is the case for deminers, (EOD Explosive Ordnance Disposal), firefighters exposed to toxic fumes, helicopter pilots or fighter pilots.

Ouvry has developed an undergarment that can be worn underneath normal equipment and protects against vaporous CBRN agents, with liquid protection provided by the outer garments.

It was therefore essential to measure the extent to which wearing such an additional garment does not interfere with the individual’s thermal regulation.

The undergarment tested is the NRBC OCPU® undergarment from Ouvry. It consists of a filter media based on activated carbon microbeads and is made of a single piece close to the body.

Volunteers dressed in military PPE and OCPU® underwear were placed in a climatic chamber with the following parameters:

The measurements taken continuously during the 160 minutes of the experiment were :

° Weight loss during the experiment (mainly due to sweating).

Under clothing, in a warm environment, the skin temperature rises, causing the core temperature to warm up. The body must therefore evacuate the excess heat through the skin by the classic means of cutaneous vasodilatation, sweating and increased cardiac output If the ambient temperature rises excessively, heat exchanges are not sufficient to keep a balanced heat balance, which leads to heat storage and a sharp rise in body temperature: this is hyperthermia (see previous article Ouvry).

On the 2 graphs that we present: evolution of rectal temperature/time and heart rate/time of subject N°1, we note that the curves of the same individual without OCPU® (REF) and with OCPU® were quite similar.

The values at the end of the year were as follows :

Exposure limit times (ELDs) related to thermal storage are determined for each subject at the following thresholds (standard ISO 9886) :

– “danger”: an increase in rectal temperature of 1°C ;

Dehydration and thermal storage thresholds were not reached during the experiment.

The values at the end of the exercise were within physiological limits.

This experiment proves that in a cold environment, with the possibility of evaporation of perspiration, the duration limit of exposure (DLE) with OCPU® underwear is unchanged.

To how well does the OCPU® undergarment, placed under the main garment, protect against CBRN threats in vapour form?

The complete equipment with OCPU® was tested by 2 volunteers in a chamber for one hour in dynamic activity (Whole System Test) with a dose of 105 mg.min/m³ of Methylsalycilate (MeS), simulating mustard. The results showed a limited penetration of 7.7 mg.min/m³ for the first volunteer and 13.3 mg.min/m³ for the second, proving the real effectiveness of this internal protection against toxic vapours. We have already shown that this result was much better than in the case of a waterproof suit.

A questionnaire was completed by each of the participants and the system was psychologically very well accepted.

It is specifically designed for fighter pilots. Protected in their cockpit from liquid threats, they sometimes require CBRN protection such as steam to be worn under their suits.

The OPPS® system consists of 2 complementary systems, one above the neck and the other below the neck.

All interfaces are studied in order to make the system as coherent as possible.

Thermophysiology experiments have shown us that the OCPU® undergarment was able to effectively protect an individual subjected to a CBRN threat in gaseous form without preventing the thermal regulation without which hyperthermia could occur. The filter media based on activated carbon microbeads allows the gas exchanges necessary for thermoregulation while trapping toxic molecules. This undergarment is well suited for deminers, firefighters, helicopter pilots or fighter pilots.

On the other hand, a more complete offer called OPPS® makes it possible to protect a fighter pilot with CBRN equipment in addition to his flight suit, protecting his head, face, body, hands and feet, fully adapted to the pilot’s functions in the aircraft (defogging system, anti-drowning system…).