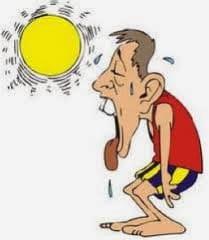 We describe in this section how clothing can both protect against extremely toxic chemical liquid and gases and in the same time allows the regulation of body temperature.

What are the solutions ?

A warm-blooded animal maintains its body temperature at a constant level irrespective of variations in the external environment. In humans, values ​​that correspond to optimal function of the organism range from 36 ° C to 37.6 ° C.

“Poikilotherm” animals do not regulate their temperature and their central temperature is a function of the outside temperature. This is the case, for example, of reptiles, which are also called cold-blooded animals, because they always seem colder than we are when we are in contact with them. Not adapted to extreme conditions, they are not seen, for example, in polar environments where temperatures are extremely low.

Thermoregulation It represents the set of processes that allow man to maintain his internal temperature within normal limits. It results from a balance between the production of heat (thermogenesis) and heat losses (thermolysis).

Thermogenesis It is metabolic activity and muscle contractions that provide heat to the body. For example, when it is cold, repeated muscular contractions bring heat: it is what is called chills.

Thermolysis This phenomenon allows the body to dissipate thermal energy: there are 4 modes of heat exchange:

+ radiation. In the form of infrared radiation from the skin to the colder environment (60% of heat loss);

+ Convection and conduction. The amount of lost heat depends on the difference between the temperature of the skin and the external environment one. The temperature of the skin depends closely on the blood circulation: when it is warm, the blood vessels increase in size so a larger quantity of blood and then of heat, flows in contact with the skin to be evacuated. Then, the person takes a red color and is said to be hot!. When it is cold, the skin vessels tighten to avoid heat loss and then become rather pale;

+ evaporation. A passive diffusion of water vapor coming from the respiration makes it possible to eliminate heat. A loss of water through the skin is also effective: this phenomenon called sweating makes it possible to eliminate large quantities of water by means of a fully adjustable active system. On the other hand, sweating is effective only if it is followed by the evaporation of sweat. Otherwise the organism is in danger.

The body’s response to heat

As we have just seen, when the external temperature increases, the compensatory reactions are: vasodilation and sweating.

When the outside temperature is above body temperature, sweating becomes the only thermoregulation mechanism. The sweat produced must be eliminated. If sweat is not eliminated, it can lead to two phenomena:

These two syndromes are explained by the increase in temperature, loss of NaCl and dehydration. The environment is warm, the heat does not escape by radiation, convection or evaporation of sweat. This is the typical case of symptoms that appear in the case of BCRNe waterproof suits.

In a mild environment, the human body produces little sweat or saturated water vapor. Under these conditions the nature of the garment does not matter about thermoregulation. On the other hand, when working in a hot environment, the dry heat through conduction, convection or radiation is not sufficient to conter the production of heat. The sweat increases in order to cool the skin by evaporation. This causes an increase in the relative humidity of the microclimate between the skin and the textile which quickly becomes unbearable if the water vapor is not removed by the garment.

Among the technical characteristics which allow to appreciate the thermal comfort, two of them can be cited: the air permeability and the resistance to water vapor.
Air permeability. It is measured by means of ISO 9237. This is the air flow of the air flowing perpendicularly through a test piece under prescribed test surface conditions, pressure loss and duration. It is expressed in L / s.m2. The higher the value, the easier the air flows through. For example, we can feel the wind through the garment in the case of large flows. If the value is low, the air goes less well and the insulating effect is better.
Resistance to water vapor (Ret), also called resistance evaporation. It is measured by the standard NF EN 31092. Water vapor resistance, expressed in m².Pa / W, determines the “latent” heat flux of evaporation through a given surface when a pressure gradient of steam over time is applied to it. The textile is placed on a porous plate of 20 × 20 cm which simulates the skin heated to 35 ° C. and maintained at 100% relative humidity. The transfer of water vapor is measured through the textile.
It is a measure of the fabric’s ability to evacuate the wearer’s water vapor, essentially perspiration. The higher the resistance, the more the clothing prevents evacuation of perspiration that accumulates on the body.

The textiles are divided into 3 classes

The high values (Ret> 40) show that the textile does not allow the water vapor to run through, the low values (Ret <20) are characteristic of the textiles allowing the water vapor to run through easilier.
In the class 3, values between 10 and 20 are considered to be mediocre. Under 10 they are good. For exemple, confort standards for the the policemen and firefighters clothes require Ret values under 10.

Beyond comfort, the Ret determines the maximum continuous wear time depending on the temperature. The more perspiration accumulates in cold conditions, the more the wearer can cool down quickly. In warm conditions, an accumulation of perspiration leads to an acceleration of the heart rate and a risk of thermal stress.

The values of air permeability and evaporative resistance are very important in the case of BCRNe outfits.
In order to protect against toxic products, a waterproof suit can be coated which, by definition, does not allow air or water vapor to pass. The protection is therefore apparently maximum but, as we have been able to show, the movements of the wearer are at the origin of the so-called “[pumping effect->https://www.ouvry.com/CBRNe/comparaison-des-protections-etre.html#content]” allowing the toxic to enter by the interfaces.
Moreover, since neither air nor water vapor pass through the textile, the operator is rapidly unable to carry out a thermoregulation and is put in danger by exhaustion or heat stroke.

In the case of the “filtering” protective outfits from Ouvry the air is able to pass through the textile as well as the water vapor. The evaporation of the sweat is thus ensured and the thermoregulation leads to an effective cooling of the individual. In contrast, the active carbon microbeads filter liner captures toxic gases before they reach the skin.
Three concepts have been developed. “Force concept” with a protection against liquids, vapors and aerosols during 24 h, “First responder concept” against liquids, vapors and aerosol during 12 h and “Specialist concept”, an undergarment with a vapor protection of 24 h. In the case of the 24h protection CBRN permanent wear concept, there is an external water-repellent, oil-repellent and flame-resistant fabric . For the personal protective equipment Civil Defence (NRBC combination), the outer face is water-repellent and oil-repellent. The NRBC 24h protection CBRN undergarnment concept O’CPU underwear is intended to be worn under specialized clothing and therefore only protection against NRBC agents in vapor form.

These 3 equipments which have values of evaporative resistances (Ret) under 7 m2.Pa/W, allow very easily the water vapor to run through: the sweat is well eliminated. For these 3 protectives suits, the air permeability vary, according to the textile structure and the fields studies show that they allow a good thermoregulation.

For these field studies, reference may be made to the following studies: (1) (2)

For the undergarment an experimental study has shown that the wearing of this undergarment under a fighter pilot’s equipment does not lead to a variation of the body temperature compared to a traditional underwear (T. Pauchard and T. Pollet, Ouvry , CBRN Research & Innovation 2015, Antibes Juan les pins).

In the field of BCRNe protection there are two main concepts: watertight protections and filter protectors.
The watertight protections give an apparent safety if we does not take into account the “pumping” effect which can allow the penetration of the toxic gases inside even in the presence of interfaces reinforced by tarlatane for example.
Moreover, these protections do not allow gas exchanges with the outside and block the evaporation of sweat, an essential step in thermoregulation. This can lead to the phenomenon of “heat exhaustion” or “heat stroke”. In normal working conditions and especially in hot environments, these protections must be removed regularly, otherwise the manipulator will be endangered.
The filter protections have the advantage of allowing gas exchange and therefore a better thermoregulation. They avoid the adverse effects of elevated body temperature and require less clothing changes. In addition, as air circulates more freely, pumping effects are reduced, and in the event that toxic gas enters the interior through an interface, it is again trapped internally by the active carbon liner.