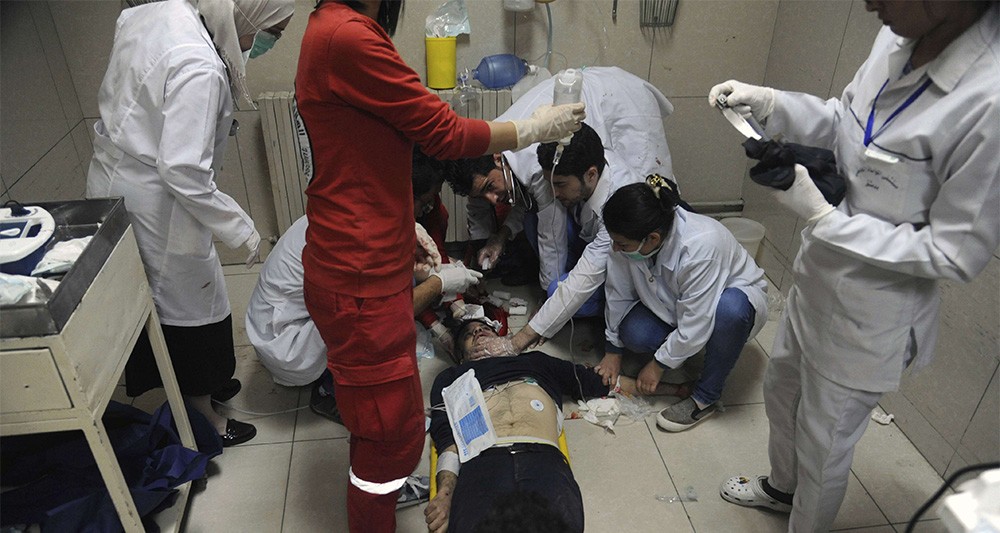 It makes an excellent evaluation of the clinical signs to know to apply the good treatments in case of chemical attack. Specialists can refer to the original article for more information.

A toxidrome or toxic syndrome is the symptoms that result from the toxicodynamic action of a toxic product. It consists of all the clinical, biological and/or electrocardiographic signs referring the clinician to a particular toxic class.

Use on civilian populations

Terrorist attacks using chemical products against civilians are more and more frequent: sarin gas in the Tokyo underground (Secte Aum, 1995), Iran-Iraq war (1983), during which Iraq uses sarin, tabun, HD, cyclosarin on Iranian civilian and military populations but also on Kurds, allied to Iran, more recently in Syria where sarin and chlorine were used against civilian populations. Let us also mention the murder of Kim Jong-nam by VX and the poisoning of Sergei Skripal by a Novichok. It should also be noted that Novichock represents a new generation of products that are presented in a binary form whose 2 constituent products are non-toxic. The toxic properties of the mixture are superior to those of conventional products, they are also easier to transport and much less detectable.

The toxicological characteristics required by users are: high product volatility, rapid and effective absorption through the skin and respiratory tract and rapid onset of lethal or incapacitating effects.

Neurotoxic agents (Sarin, VX…), asphyxiating agents (Cyanide…), opioids (fentanyl…) are subject to medical countermeasures using specific effective antidotes such as atropine and pralidoxime for neurotoxic agents, hydroxocobalamin or sodium thiosulfate and sodium nitrite for cyanide and naloxone for opioids.
All other agents are incapacitating or even fatal, but do not possess specific antidotes. Immediate decontamination (by the DecPol glove for example) and first emergency care should then be instituted.

A chemical attack usually causes panic, which can lead to disorganisation between first aid and the hospital services responsible for receiving the injured. Everything becomes complicated when the attack is called “multimodal”, i.e. it involves conventional weapons and chemical weapons at the same time. This can lead to increased delays in identifying chemicals and endangers the first aid workers themselves, victims and hospital staff through cross-contamination. Therefore, a good knowledge of conventional weapon injuries and clinical signs caused by toxic agents (toxidromes) is essential. Without proper identification of the toxic class, it is not possible to administer the correct antidotes, appropriate care or even use the proper personal protective equipment (PPE).

Triage is a crucial time. Different systems exist, based on the different categories of treatment – minimal, non-urgent, urgent, absolute urgency – which do not take into account the presence of chemical products or their identification. Other systems consider only the presence or absence of nerve agents or the Madsen* protocol, which seems the most effective but is so complex that it can only be used after the acute phase of the attack.

Taking into account the knowledge of toxidromes, an algorithm can be created for use in the acute phase, clearly distinguishing between victims requiring antidotes and those requiring emergency care. The algorithm can be found in the original article.

An efficient and safe response

A chemical attack may not be identified as such immediately. The chemical can be released by an explosive device for example. It will cause casualties mistakenly identified, at first, as victims of conventional weapons. First aid must then observe clinical signs suspected of being the consequence of chemicals. If a chemical weapon is suspected the emergency services must avoid contamination and use PPE. In this case, the knowledge of the toxidromes makes it possible to make an effective triage allowing the best care quickly.

For example injuries are due to the use of conventional weapons (firearms, grenade…) conventional triage is used while monitoring the possible occurrence of a chemical or radiological attack. When symptoms are not due to a conventional weapon, first aid must be provided with PPE and toxidromes must be studied rapidly, starting with those corresponding to the lethal agents against which there are antidotes: nerve agents, asphyxiating agents, opioids.

Surrounded by thick lines, victims requiring immediate antidote, simultaneously with decontamination and emergency treatment. For central and peripheral respiratory toxicants, they are not mutually exclusive: for example, chlorine and lewisite or high doses of other toxicants can damage bronchi, bronchioles, and alveoli.

In the event of a terrorist attack, the triage of victims, taking into account the toxidromes of the most commonly used chemicals and a simple algorithm, must quickly identify the victims who require immediate treatment with a specific antidote (neurotoxic, asphyxiant, opioid). Then, will be implemented emergency care (ventilation) and emergency decontamination.