What is a variant? 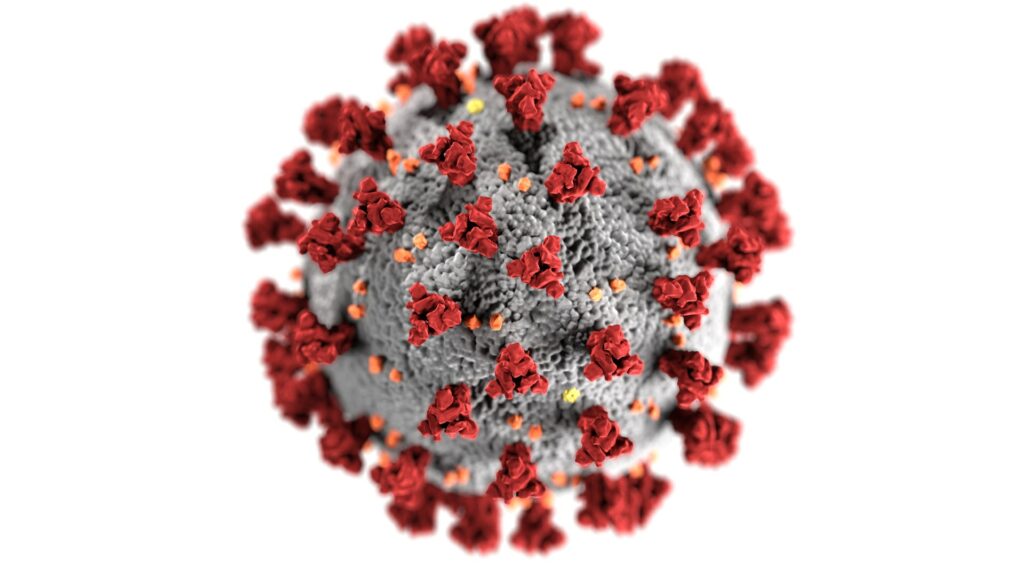 We will help you to understand what a variant is and how the immune response generated by the disease or vaccine works.

For the record, you can refer to the article we wrote on RNA vaccines.

SARS-CoV-2 is an RNA virus, enveloped by a double lipid layer: its genome is formed by RNA which codes for 15 genes, 4 of which correspond to structural proteins: a surface protein (Spike or S protein), a membrane protein (M), an envelope protein (E) and a nucleocapsid protein (N). Here is a diagram according to Wang N et al. Front Microbiol. 2020

To enter a cell, the Spike protein binds specifically by its RBD part to a receptor called ACE2 and then it sinks into the cell, before “undressing” its RNA which forces the cell to make the different viral elements. At the end of the reproduction process, the different parts assemble and the viruses exit the cell by budding, surrounding themselves with a piece of the cell membrane that constitutes its envelope, According to Prévost J, Finzi A. Cell Host Microbe. 2021 Mar 10;29(3):322-324.

What is a variant?

The genetic material of the virus is an assembly of molecules called nucleotides, aligned in a very precise sequence that forms the genetic code of the virus. From this genetic code, the host cell will manufacture the different elements of the virus that will assemble to form a complete virus.

In the infected cell, the virus must make copies of its genetic material in large numbers, this is replication.

The enzyme in charge of the replication is called RNA polymerase. This enzyme works very fast from a large RNA and it can make mistakes (a missing nucleotide, another one that is not in its right place…). If they are not corrected, they lead to a “mutation”: the original genetic code is modified and its reading will give birth to a different protein and thus to a slightly modified virus called “variant”. It is considered that a multiplying coronavirus undergoes a mutation every 10 days.

Mutations occur completely at random. Often the mutation does not bring any new characteristic to the virus, so it is said to be “neutral”. Others can be deleterious and harm the propagation of the virus which then disappears.

Sometimes, the accumulation of mutations can facilitate the infection or make the virus more dangerous, so it will be conserved by natural selection and, often, will take over the original virus – this is what happened with the delta virus.

These new variants may affect the transmission capacity, replication speed or the ability of the virus to bypass our immune system.

This was the case for the so-called “English”, “South African” and “Brazilian” variants. These variants present mutations in the Spike protein, facilitating its interaction with the ACE2 receptor, giving it better infectious capacities.

The different types of variants

Variants of Interest (VOI) that affect virus transmission, diagnosis, treatment or immune response. They are responsible for an increase in the number of cases or clusters in several countries. No such variant in SARS-Cov-2.

The variants of concern present, in addition to the characteristics of the preceding variants, an impact on the diagnosis, more severe pathologies, changes in the symptoms, a better transmissibility and an influence on the immune response. This is the case of the delta variant.

There are also variants of High Consequence that have not yet been detected in Sars-Cov-2.

The more people are infected, the more the virus multiplies, the more errors accumulate, the greater the probability of variants appearing, and the more contagious they are, the more deadly they are mathematically since they affect more people without being more dangerous. On the other hand, variants of concern are generally more dangerous.

In order not to stigmatize the populations which are not responsible for the appearance of a variant, it was decided to rename the variants according to the Greek alphabet: (17 mutations including 8 on the Spike protein), South African variant; Beta, Brazilian variant; Gamma, Indian variant; Delta…

The “omicron” variant; it has an extremely high number of mutations: no less than 30 in the Spike protein (the delta variant had only 2) and another 10 mutations elsewhere. It is still some time before its characteristics are known, but it appears to have a very rapid potential to spread and to be able to hijack the immune system. It has just been classified as a variant of concern by the WHO.

How can a variant avoid the action of vaccines?

Vaccination consists of introducing the virus (antigen), devoid of pathogenicity, into the organism in order to trigger an immune response that generates memory cells ready to rapidly intercept the real virus in case of infection by the latter.

There are two types of immune response: a “humoral” response, which results in the formation of free neutralizing antibodies in the serum, which, by binding to different parts of the Spike protein, prevent the virus from attaching to the cell and thus play a role in reducing the infection, and a so-called “cellular” immune response, based on the recognition by T lymphocytes of cells infected by the virus. These T cells carrying antigen-specific receptors (these receptors are very similar to antibodies) will, through various mechanisms, contribute to the destruction of the virus-infected cells, thus controlling the viral infection and contributing to the elimination of the virus from the body.

After vaccination (usually 2 injections and various boosters), the immune system is able to give a so-called “secondary” response that will react rapidly to give a large quantity of antibodies and antigen-specific T cells in case of reintroduction of the virus. This secondary response is therefore faster and more intense than the primary response.

The interactions between antibody or cell sites and viruses are very specific. In the case where an individual is already immune to a Sars-Cov-2 virus, either naturally or by a vaccine, and is contaminated by a variant whose Spike protein has been profoundly modified by mutations, it could be that the antibodies or cellular receptors produced during immunization no longer have the adequate spatial structure corresponding to this new protein. Either the adaptation is less good and the receptors have a lower affinity, or the changes are too deep and there is no interaction at all. In this case, the variant could escape the beneficial effect of vaccination.

For antigen 2, its round spatial shape does not allow it to bind to antibodies or to the cellular sites of the T cells derived from vaccination. This non-neutralized variant will bind to ACE2 receptors and produce the infection. Concerning antigen 3, we can see that its rather pointed spatial shape on the diagram presents some analogy with antigen 1 which is also pointed. It will therefore be taken up, but with less affinity, by the antibodies and receptor sites of the T cells, this is called a “cross reaction”.

Variants appear inexorably during the multiplication of viruses. If the variants bring to the virus characteristics of a better transmissibility or dangerousness, they are selected and can even take the place of the existing viruses (current delta variant). The variants can also escape the immune system prepared during the previous immunization due to vaccination.

It is therefore urgent to stop the viral multiplication, by barrier actions and vaccination, in order to avoid the appearance of mutants that are more difficult to control. Fortunately, the messenger RNA technology used by some current vaccines allows, by modification of the RNA, to reproduce the mutations of the variants and thus to adapt future vaccines as quickly as possible.

° Sebastian Pomplun  Targeting the SARS-CoV-2-spike protein: from antibodies to miniproteins and peptides https://pubs.rsc.org/en/content/articlelanding/2021/md/d0md00385a