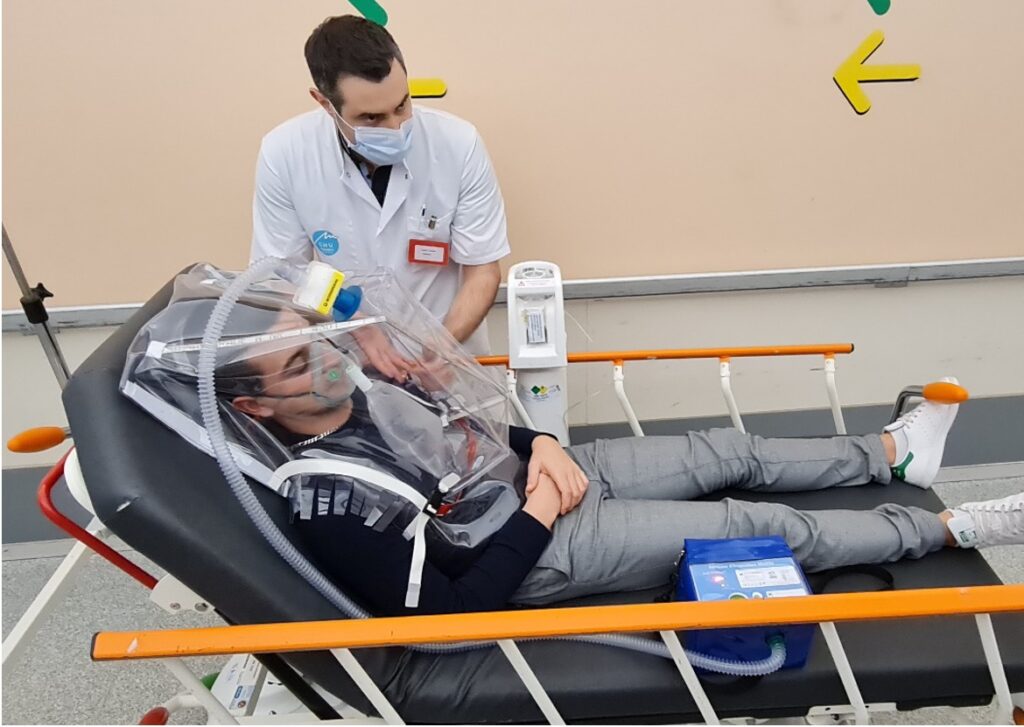 The Secours Expo exhibition was created in 2015. This event, placed under the high patronage of the President of the Republic, welcomes each year about 10,000 visitors who come to visit the 150 exhibitors. This exhibition dedicated to rescue, emergency care and prevention of professional risks has welcomed this year only 2 200 people for about sixty exhibitors, due to the health crisis.

As every year, 3 innovation trophies were awarded: the manufacturer Tanit Evolution was rewarded for the Air’Protec® system, a mobile protective device designed to isolate the ENT sphere of a patient suspected of being contaminated by Covid-19 or any other respiratory infection (tuberculosis for example).

Why such a device?

Respiratory diseases such as Coronavirus (SARS-Cov, MERS-Cov, SARS-Cov-2) or tuberculosis, influenza, or even meningococcus, are transmitted by airborne means only. Microdroplets and aerosols are emitted through the respiratory tract and contaminate healthy people who are nearby for droplets or further away for aerosols. This is why wearing a mask remains an essential barrier to stop the transmission of such infections.

On the other hand, a contaminated patient requiring care and prior transport (by land, sea, or air) represents a significant source of contamination for the caregiving staff, even if they are equipped with the regulatory PPE. Isolating the patient in a complete system such as a tent is not necessary since the contamination is only through the ENT sphere.

The company Tanit Évolution in collaboration with the University Hospital of Grenoble-Alpes has just developed a mobile protective device that isolates the ENT sphere of patients suspected of being contaminated. The device resembles a diving helmet but is very light, completely transparent and does not cause feelings of claustrophobia. This mobile isolation bubble encompasses the patient’s head by securing around the shoulders/thighs and then around the chest. A mobile suction system (or central vacuum depending on the arrangement) connected to a standard resuscitation ventilator filter, draws in the patient’s exhaled airflow and renews the air inside the bubble.

In these conditions, the air is continuously renewed in the bubble, the exhaled air is filtered and rejected in the outside environment and there is no fogging on the device. The bubble can be removed very easily to allow the administration of treatments such as oxygen, nebulizations, ventilation gestures…). In these conditions, the system guarantees the care of the patient without any break of isolation from the place of his care until the final destination since it is completely autonomous and works whatever the environment of the patient.

1- measurement of the particles emitted during a nebulization treatment.

A test was performed during a simulation representing an extreme contamination risk: a conventional open nebulizer was used as particle generator. The Cirrus 2 nebulizer (Intersurgical©, France) was propelled by oxygen at 9L/min.

Without the bubble, in an emergency room examination room with room air change of 3 to 4 times the volume per hour, were noted increases in the number of particles (≤ 5µm) of :

Under the same conditions with the bubble, no increase in particles (≤ 5µm) was observed during the implementation of the system for the entire duration of the nebulization.

When the aspiration is stopped, an increase of particles is detected in the near environment. This increase is more pronounced when the bubble is opened.

The same results were obtained with the mobile vacuum system and the hospital vacuum.

Note that the experimental conditions for testing such a system were relatively severe.

A clinical study directed by the emergency room of the CHU of Grenoble and the SAMU of Isère is in progress with the aim of confirming the utility of the device.

2- Comparison with other systems

The following diagram compares the main characteristics of the different current isolation systems: a filter mask, the bubble, a bubble stretcher and a negative pressure chamber;