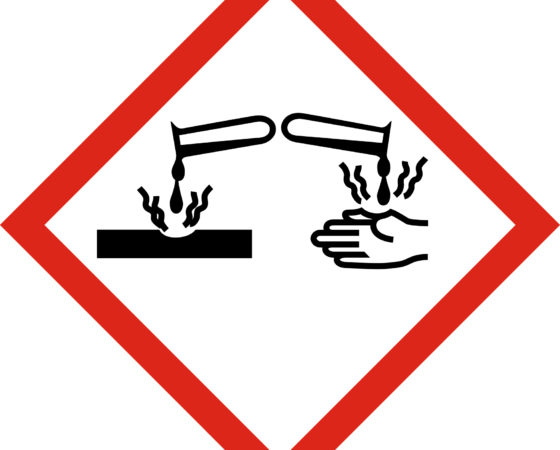 The security police, who are responsible for maintaining security during the demonstrations that are taking place in our country, may have been targeted by jets of corrosive products such as strong acids.  This is an opportunity for us to review chemical burns: how do the products work, what are the emergency treatments?

A glimpse of history

On the one hand, there are accidental exposures to corrosive household products (strong acids for descaling, strong bases for unclogging pipes or cleaning ovens…), or to professional products in the workplace such as hydrofluoric acid (petroleum industry, glassmaking, metallurgy, uranium), acids for batteries, bleach… Children are generally burned in the family environment during their so-called “exploration” phase. Direct contact between child and product is sometimes obvious (skin or eye contact) but it can sometimes be hidden when the product has been ingested. Adults are victims both at home and at work.

On the other hand, burns can occur as a result of acid jet attacks, for example. These violent demonstrations have been known since the mid-19th century but are on the increase. Previously known as “honor killings”, they may be committed by jealous men or pregnant women outside marriage (less frequent).

Currently, the number of other types of attacks is increasing: in 2016 in Great Britain, 700 cases were reported, including 431 in London. They are the result of gang competition and delinquency: men are more frequently affected than women, unlike in previous cases. In June 2017, a 47-year-old British nurse died after being sprayed with acid. She died of sepsis.

In Europe, the number of burned or disfigured victims has increased dramatically in the last ten years. More than 2,600 acid attacks were carried out between 2015 and 2018, an average of two every day.

In France, 4 American women were assaulted at St Charles de Marseille station in 2017 and 3 people in the Paris metro in February 2019. This weapon, accessible to all and available over the counter, could have been used against the police during the weekly violent demonstrations currently taking place in France.

Which corrosive products are most often implicated?

The danger is that only a simple, non-specific treatment of the causative agent will be carried out, leading to an increased risk of systemic toxicity (through the skin or by inhalation).

The severity of a chemical burn is directly related to:

The main mechanisms of action of acid burns are dehydration, protein coagulation, and exothermic reaction. Lesions are most often well defined and not very deep with dry necrosis resulting in less exudation, reduced risk of infection and slow detersive action. In 76% of cases, chemical burns are caused by sulphuric or nitric acid.

They act by destroying proteins and collagen with cellular dehydration and caloric release. Lesions are liquefaction necroses with irreversible changes in the protein matrix and local or general vascular damage. Liquid losses are very high. Eye damage is very serious. The main agents responsible are  NaOH and ammonia NH4OH, which emits very irritating gases.  Alkaline agents are generally more toxic than acid agents due to the irreversible destruction of proteins.

Skin
Remove clothing and all contaminated objects such as rings and other jewelry; it is necessary to remove the corrosive product from the skin as soon as possible.

As we have already read in the blog on dry decontamination, the absorption of the product by dry absorbent support considerably reduces the harmful effects of the product, if only to avoid spreading the product.

On the other hand, irrigation with water is essential.

We often talk about the three 15 rule.

Reading the various publications, we notice that the number of 15 is much higher than 3!

Do not use neutralizing products such as a basic product to neutralize acid or vice versa.

When hydrogen fluoride is involved, a specific treatment is possible combining early and prolonged washing with water and the administration of calcium gluconate. Gluconate can be administered as a 2.5% gel or as a 10% subcutaneous injection (0.5 mL per cm2 of the burned area) in burned areas. In the case of necrosis, surgical excision will be performed.

When the eye is reached its thorough rinsing with water, including under the eyelids is essential.

Note the highly discussed place of Diphoterine ® as a decontaminant of the skin and eyes. This product is amphoteric and hypertonic but we do not know its composition. Its hypertonicity would prevent the chemical from penetrating into the tissues. It would have a certain and fast analgesic virtue. Its chemical binding energy with the agents would be higher than that of the tissue receptors. It would act on chemicals through a non-exothermic reaction. However, scientific studies show a lack of objective data demonstrating the superiority of Diphoterine ® over water washing. This product does not have the status of a drug but only a medical device and its clinical efficacy has not been proven.

To be exhaustive, when faced with a chemical burn, whatever the dilution of the causal agent, the duration and/or the contact surface, the question of the risk of systemic toxicity must always be considered. 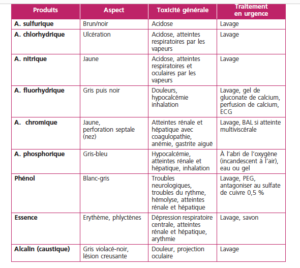 When ingested, no emetic or neutralizing agents that could aggravate the situation.

In the case of button cell batteries (especially by children), they are likely to release alkaline products causing local burns, usually esophageal. This requires endoscopic management and radiographic follow-up. Early removal is strongly recommended. If the battery has passed through the pylorus, wait patiently and be sure to watch for it to appear in the stool.

The interest of Decpol ABS® wipes

Decpol ABS® wipes are essential to limit the spread of chemicals on clothing and skin. These systems prevent spreading and stop the penetration of chemicals into the skin. The simplicity of use and the small size, in particular, Decpol ABS® wipes, make it possible to be efficient by intervening quickly: this is a key factor in limiting the severity of chemical damage. Note that the wipe is part of the “Emergency Protection Kit”.