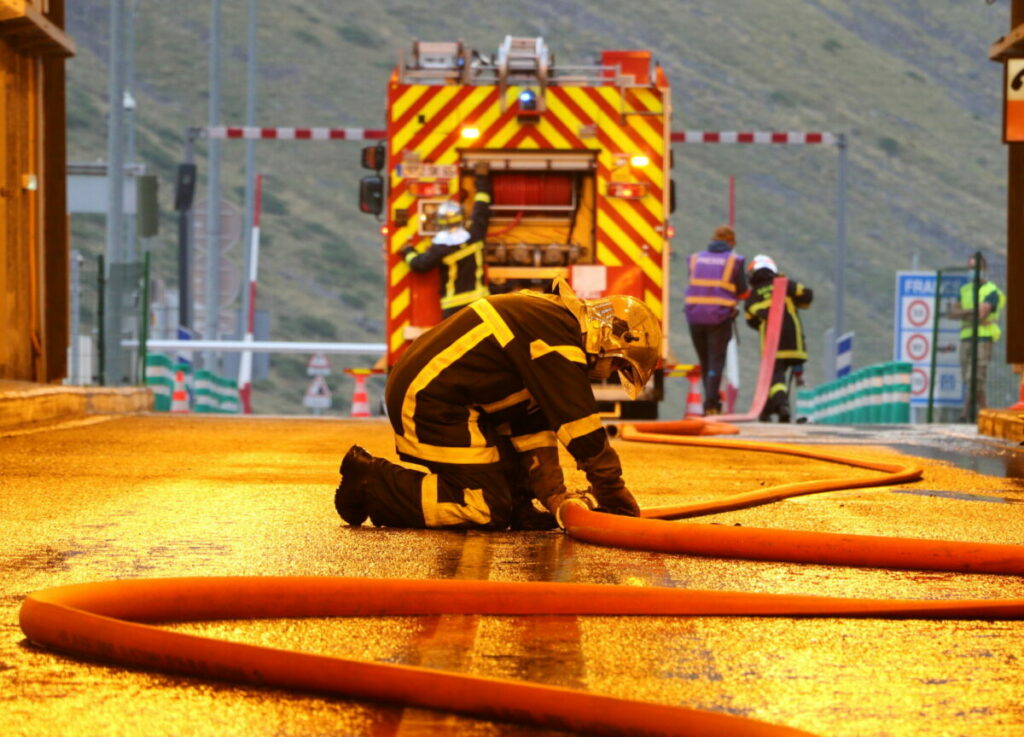 Firefighters are the focus of attention when it comes to their health.

We will analyze here some recent articles concerning the professional life of firefighters: evaluation of the carcinogenicity of occupational exposure as a firefighter (IARC Lyon (1), exposure to endocrine disruptors contained in flame retardants and markers of thyroid activity, (Kemi Ogunsina et al. (2), spinal pain in firefighters (3).

We have already discussed in this blog the exposure of firefighters to carcinogenic substances.

The cancer agency of the WHO (International Agency for Research on Cancer = IARC, Lyon), assembled in June 2022, Twenty-five scientists from 8 countries to finalize their evaluation of the carcinogenicity of occupational exposure of firefighters. The results have been published in The Lancet Oncology and posted online by SNSPPats. The results are clear: occupational exposure has five of the ten key characteristics of human carcinogens: “is genotoxic”, “induces epigenetic alterations”, “induces oxidative stress”, “induces chronic inflammation” and “modulates receptor-mediated effects”. It is therefore considered a human carcinogen (Group 1 = Sufficient evidence of carcinogenicity in humans.) The working group concluded that there was “sufficient” evidence for mesothelioma (a malignant tumor that affects the cells of the mesothelium, the protective membrane that covers most internal organs such as the pleura, peritoneum, and pericardium), as well as for bladder cancer. For mesothelioma, the most common form is pleural cancer. For a Firefighter, the risk of mesothelioma is 58% higher than in the general population. There is also sufficient evidence for bladder cancer, although the increased risk is only 16%, but it is statistically indisputable. The carcinogens are polycyclic aromatic hydrocarbons (PAH) and soot.

For colon, prostate, testicular and thyroid cancers as well as for melanoma and non-Hodgkin’s lymphoma the evidence is limited.

The professional exposure of firefighters is very complex: they do not all perform the same work, which may also evolve during their career: structure fires, vehicle fires, vegetation fires…, the release of hazardous materials, building collapse (asbestos…), road accidents, laboratory fires…

Even though PPE is very useful, it sometimes has its limits: breathing apparatus less often worn during forest fires, insufficient protection against skin absorption, secondary contamination of those not in the field by those returning, etc.

We have also seen in this blog that the firefighters’ hood was absolutely not effective in protecting against smoke and fine particles.

In summary: the activity of the fireman puts him in contact with carcinogens causing mesothelioma and bladder cancer.

The previous study found no correlation between being a firefighter and the risk of thyroid cancer. Thyroid peroxidase (TPO) is an enzyme normally found in the thyroid gland. It plays an important role in the production of thyroid hormones. It is quite often identified as a target of autoantibodies (antibodies made by the body itself against its own antigens), characteristic of autoimmune thyroid diseases such as Hashimoto’s thyroiditis.

If you have been diagnosed with thyroid disease, your doctor may suggest a test for anti-TPO antibodies and other thyroid tests to find the cause.

Antibodies that attack the thyroid gland cause swelling of the gland (goiter), and reduced thyroid function (hypothyroidism). Some people with anti-TPO antibodies may not have thyroid disease, but their presence can cause future thyroid problems.

Exposure to endocrine-disrupting chemicals may be associated with hypothyroidism and possibly autoimmunity. Firefighters are known to be exposed to endocrine disruptors contained in flame retardants; however, the prevalence and risk factor associations of thyroid antibodies in firefighters are unknown.

The study examined 278 firefighters with no prior diagnosis of thyroid disease. They were asked to submit to a health survey. Blood samples and an ultrasound of their thyroid were performed. The survey assessed sociodemographic and occupational characteristics, including the history of familial thyroid disease, smoking, job tenure, and job rank. Radiation exposure and occupational exposure mitigation practices were also considered. Serum thyroid peroxidase antibody levels were also measured.

The results were as follows:

The results of the study confirm that a family history of thyroid disease is a major risk factor for firefighters. The authors found no significant association between positive tests and a history of smoking or radiation exposure, nor the geographic location of the fire station. In addition, age, number of years employed as a firefighter, and implementation of prevention practices, such as regular washing of equipment to reduce contaminants, were not associated with the likelihood of a positive test among firefighters.

However, the fact that the prevalence of anti-TPO appears to be high among firefighters in general means that there must be other factors associated with the increased risk, and that long-term follow-up may be necessary to monitor for thyroid insufficiency. Firefighters with a family history of thyroid disease may need more frequent follow-ups. Additional studies are being conducted to examine the association between serum PBDEs (Polybrominated diphenyl ethers) and anti-TPO antibodies in firefighters to address these health risks in this occupational group.

This paper is already ancient (2018). Musculoskeletal disorders, which mainly affect the spine, are one of the main social problems. They are often the cause of prolonged absences from work. The authors’ aim was to investigate to what extent firefighters, like many of our contemporaries, suffer from spinal injuries. The work as a firefighter is specific because of the physical effort, the time spent working under unfavorable conditions or the stress related to the rescue operations.

Especially since, in addition to their PPE, they are required to carry heavy loads (such as oxygen tanks for indoor fires) of up to 20 kg). They may also perform physical efforts such as climbing ladders, and often in extreme heat or humidity conditions.

The study group consisted of 61 firefighters, 60 men (98.36%) and 1 woman (1.64%). The age of the examined firemen ranged from 20 to 56 years. The average age of those examined was 33.77 years and the average length of service in a fire department was 9.59 years. The results showed that knowledge of ergonomic lifting and handling principles regarding heavy loads was known by 84% of the group, with the remaining 16% reporting ignorance of these rules.

The study also confirmed the high level of physical activity of firefighters.

It also showed a minor degree of disability, with the dependence of pain on the seniority of those examined also being insignificant.

In conclusion, firefighters are sporty people, who know their job well as to the gestures to adopt, so much so that neither their age nor the time spent in the service of the institution is a source of pain in the spine.

We now know of 2 cancers related to firefighting: mesothelioma and bladder cancer;

Firefighters are more often subject to an increase in anti-TPO (thyroid hormone) autoantibodies, which are a source of potential thyroid disease, especially if they have a family history;

Firefighters are great athletes, know their job, and are not prone to spinal pain.

It should be noted that many publications are about firefighters’ PPE, we will have the opportunity to talk about it again.