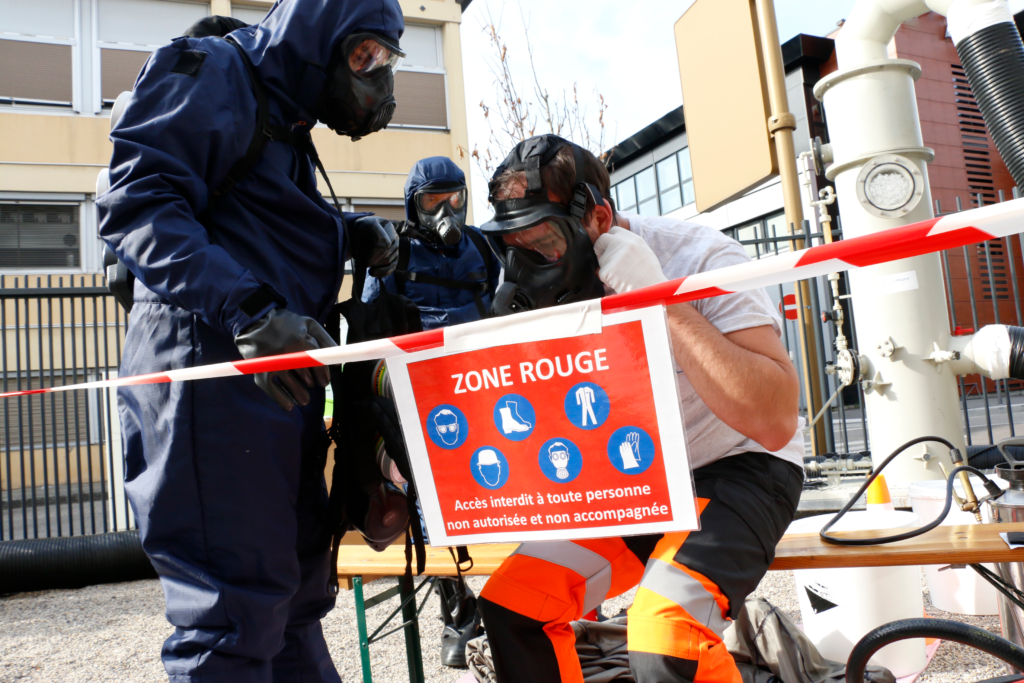 The situation seems to be changing.

The Kyiv Independent, an English-language Ukrainian media that is currently covering the war in Ukraine, recently headlined:

Spokesman for Russia’s proxies in Donetsk said on April 11 that it made no sense to storm the Ukrainian-controlled Azovstal plant in Mariupol and instead Russian “chemical forces” should “smoke (Ukrainians) out.”

What chemical weapons do the Russians have? Is there a radiological threat in this conflict? What about biological weapons?

In 2002, a Chechen terrorist group carried out a hostage crisis in the Dubrovka Theater in Moscow.  Of the 850 hostages, 131 died as a result of exposure to a mixture of opioids sprayed in the form of aerosols into the theater through the ventilation system.  The mixture consisted of remifentanil, carfentanil, and its metabolite, norcarfentanil.

The technology is under Russian control (although the large number of deaths in the room seems to indicate that the dose was miscalculated!) and it is plausible that the Russian army could use similar compounds to cause significant casualties among Ukrainian soldiers or civilians trapped in closed spaces such as apartment buildings, hospitals, the subway or bomb shelters.

It is very probable that these opioids were mixed with an inhalation anesthetic such as halothane.

Since the Battle of Ypres in World War I in 1915, chlorine gas has been used as an incapacitating and asphyxiating chemical agent. Chlorine gas is a lung irritant with a characteristic odor that makes it easily detectable. Its vapor density of 3.214 (air = 1) allowed this gas to penetrate enemy trenches to drive out the occupants. In the Ukrainian conflict, it could be used to invade underground spaces such as metro stations or bomb shelters, in order to reach the people sheltering there.

In 2018, the Assad regime in Syria, supported by Russia, used chlorine against civilians in Saraquib, a town south of Aleppo. It is not impossible that chlorine could be used during the war in Ukraine to neutralize fighters and cause many civilian deaths.

One can imagine dropping bottles of chlorine gas from an airplane to incapacitate the defenders, in anticipation of a ground attack, or loading chlorine gas into an incendiary mortar to penetrate the infrastructure.

The toxidrome shows tearing, shortness of breath, bronchospasm and wheezing. In confined spaces without ventilation, chlorine gas may persist and cause death by asphyxiation.

Treatment of chlorine gas exposures is based primarily on evacuation of the patient from the contaminated area. Victims with wheezing or persistent coughing may be treated with oxygen, bronchodilators or nebulized sodium bicarbonate.

Despite being banned by the Organization for the Prohibition of Chemical Weapons (OPCW), sarin, VX and novichok have been used by Syria, North Korea and Russia over the past decade. Kim Jong Nam soon died after exposure to VX orchestrated by North Korean intelligence agents. Sergei and Yulia Skripal in 2018 and Alexei Navalny in 2020 are the most well-known victims of the Russian novichok agent.

Because of the high persistence and hydrophobic nature of nerve agents, removal of people’s clothing and decontamination before entering a triage area can prevent cross-contamination.

The capture of the Chernobyl plant and the resulting loss of electrical power that could cause an interruption in the pumping of water used to cool spent radioactive fuel rods, and the dangerous shooting near the Zaporizhzhia nuclear power plant (Europe’s largest nuclear power plant), highlight the risk of a major toxicological disaster in the midst of the war in Ukraine.

In addition to acute radiation syndrome in people in the immediate vicinity, the release of radionuclides such as radioiodine and radiocaesium could lead to widespread environmental contamination and an increase in neoplastic diseases, including thyroid cancer and leukemia.

In addition, pre-existing radioactive water storage facilities in eastern Ukraine, used during the Cold War for nuclear weapons development, are a unique source of chronic radiation exposure in the environment. Damage to these underground facilities could lead to leakage of radioactive water into the water table, and contamination of agricultural fields as well as increased background radiation exposure for residents of these areas for decades.

Exposure to external radiation after a plant’s protective enclosure has been breached by the passage of a radioactive cloud can cause thyroid cancer. Depending on the proximity of the population centers, millions of people may be exposed, especially children. Sheltering, evacuation and the use of potassium iodide as a prophylactic are countermeasures that are sometimes difficult to apply in wartime.

Radiation exposure requires rapid identification of the dose, external decontamination by removal of exposed clothing, decontamination with water and even specialized equipment. This can eliminate up to 90% of the radiation dose.

On the other hand, at the outset of the conflict, President Putin declared that he was putting his nuclear forces on alert, so it is difficult to take lightly the threat posed by the potential use of tactical nuclear weapons or low-yield nuclear weapons that Russia possesses.

During the Cold War, the Soviet Union carried out an intense biological weapons development program with the BioPreparat program revealed by Ken Alibek (The Germ War). Ebola, smallpox and typhus were particularly studied.

After the dissolution of the USSR, the newly independent republics had to deal with the biological agents left on their territory unprotected and, worse, vulnerable to theft.

The Defense Threat Reduction Agency (DTRA) of the U.S. Department of Defense has provided assistance to former Soviet Union countries to reduce the threat posed by pathogenic strains and the laboratories that contain them.

Indeed, as early as the early 1990s, a formal program of threat reduction cooperation, from which the DTRA program emerged, was established and it fully involved Russia. But in 2012, the arrangement between Russia, the United States and other countries began to unravel.

That is why, for a long time now, the Russian authorities have been accusing these laboratories, including Ukrainian and Georgian laboratories, as well as those in Kazakhstan, Uzbekistan and Armenia, of developing biological weapons under the aegis of the American army.

This was recalled this March 10, 2022 by the head of Russian diplomacy, Sergei Lavrov.

However, there is considerable evidence that Russia maintains a biological weapons program.

In Ukraine, the nuclear and radiological are on the ground, the chemical seems not to pose problems to Russia, the biological exists but difficult to handle.

The different elements of CBRN are all potentially present.

What we know about Russia’s capture of the Zaporizhzhia nuclear power complex.