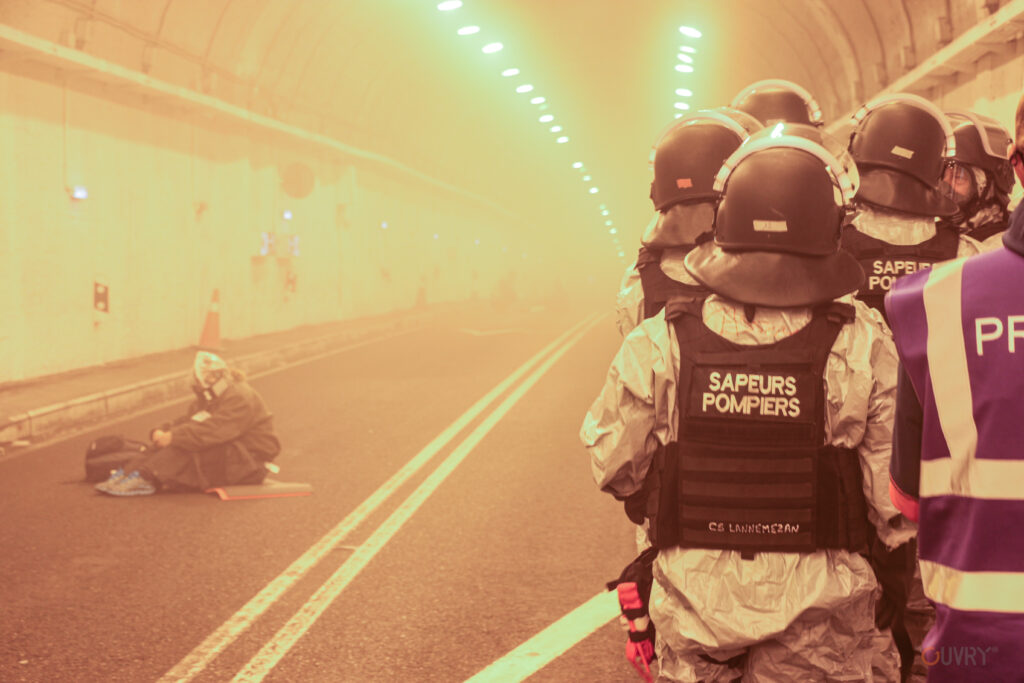 This recent publication reviews the objectives and results of the TRANSTUN project, which culminated in a live exercise on September 9, 2021 at the Bielsa-Aragnouet tunnel.

What is it about ?

The TRANSTUN (TRANSnational TUNnel operational CBRN risk mitigation) project created a network of stakeholders from more than 15 countries around the world, drafted a set of operational guidelines based on an adapted risk assessment, and undertook a live exercise involving more than 250 first responders from France and Spain, to assess safety and security procedures, optimal use of CBRN equipment, knowledge of decontamination processes, and finally to evaluate performance gains and operational capacity by measuring response time and the number of personnel required, comparing the different technologies available.

The Ouvry® company participated fully in this project.

These are infrastructures widely used by road transport, but their confined environment can represent a critical safety issue for users in case of an accident, including CBRN accidents. Not only can users inside the tunnel be at risk, but there can also be social and economic effects on the affected area (region or state) due to the prolonged closure of the tunnel, as the closure of a road section always has very large repercussions. These effects can be associated with the reduction of the mobility of passengers and goods by causing, for example, an increase in travel time due to the detour of traffic to other routes.

It is, therefore, necessary to know the specific technical and organizational characteristics of the tunnel concerned in order to assess its resilience following a major event, taking into account two main issues: (i) the potential exposure of users; (ii) the effects resulting from the closure time necessary to restore normal operating conditions.

Emergency management in transportation and mobility systems is a concept closely related to resilience. In the technical-scientific literature, several researchers have addressed the issue of the resilience of transportation infrastructure after a relevant event. There are several definitions of resilience, including those related to the scope of this study; one may be “the ability of an entity – e.g., an asset, organization, community, region – to anticipate, resist, absorb, respond, adapt, and recover from a disruption.”

Because vehicle drivers drive more carefully in tunnels than in open sections, it is estimated that the probability of occurrence of an accident is about 50% compared to open sections, therefore, the main studies concerning road tunnel safety usually focus on fires involving vehicles and the release of hazardous materials.

The Mont Blanc tunnel and the 2004/54/EC directive

Following the accident in the Mont Blanc tunnel in 1999, which killed 39 people and caused significant damage to the tunnel structure, the European Community published Directive 2004/54/EC on minimum safety requirements for tunnels in the Trans-European Road Network (TEN) longer than 500 meters.

In this context, the TRANSTUN project – co-financed by the European Union’s Internal Security Fund program – represents a unique example of a public-private partnership aimed at increasing the emergency response capacity in case of CBRN events in a real cross-border (road) tunnel. The project consortium is composed of partners from Italy, France, Belgium and Spain who, among other things, were able to carry out a real exercise in the Bielsa-Aragnouet tunnel. This is a single-tube, bi-directional tunnel with a length of 3,070 m, of which 1,303 m is in Spanish territory and 1,767 m in French territory.

The main objectives of the TRANSTUN exercise were:

4. Testing CBRN protective equipment is essential to an appropriate response.

Despite the precise preparation and training of emergency teams to intervene in CBRN fields, only real exercises can test operational procedures and highlight gaps and critical points that must be addressed.

Several objectives had been set for this exercise. They concerned tests of operational response to chemical events: on the one hand, to evaluate and improve the performance of the solutions adopted, and on the other hand, to implement and test the procedures best adapted to deal with the CBRN threat (ventilation, evacuation, etc.).

In addition, the detection devices and personal protective equipment (PPE) currently in use were tested to assess their effectiveness in a CBRN response.

While the strategy for dealing with smoke from fires seems clear, it is necessary to know in advance the effects of any other chemical substance released into a confined environment. It is therefore essential in the event of an accident to know as soon as possible the type of chemical(s) involved in order to determine the most appropriate decontamination procedure to implement.

In this perspective, the tunnel operator should be able to recognize at any time the possible presence of gases that are not usually present in the tunnel (such as those caused by vehicle traffic, pollutants, etc.).

LThe use of detection instruments can be a solution provided that the interactions between the different gases are well known. Simpler devices, for example, that measure the drop in oxygen levels, indirectly indicating the presence of unusual gases, could be a solution. The alert given will also indicate to the first responders that they will have to identify the nature of the gas once they arrive on site.

Results of the real exercise TRANSTUN

The French and Spanish first responders were the first to intervene. Among them, the participation of the police and fire department was remarkable in quantity and quality but suffered from a lack of resources in terms of medical emergencies.

First, it was important to isolate the scene and identify the different intervention zones: hot zone, warm zone and the cold zone, which is uncontaminated and used by support personnel. This was done at the exit of the tunnel on the French side.

The most urgent measure was the extraction of the victims from the contaminated area. Despite the absence of ambulances and doctors on site, the intervention of the gendarmerie and fire department made it possible to secure the victims who had remained inside the tunnel, by providing them with a hooded mask (called an evacuation mask), and to move those who had left the tunnel to an assembly point in the hot zone for decontamination. Victims were prioritized according to the severity of their symptoms, and some were provided with personal protective equipment while others were provided with emergency blankets.

The victims were not decontaminated until the fire unit’s decontamination container reached the staging area outside the tunnel and was set up.

Nevertheless, even though a large disposition of resources and personnel were provided, three specific tasks were not properly managed: 1_ The location of the stretcher decontamination shelter was poorly placed as it made it impossible for other units to enter the scene; 2_ Many casualties were left unattended for a long period of time while on the scene; 3_ Several errors were recorded in the decontamination activity such as improper use of the slope (all contaminating fluids went into the valley below), a large number of cross-contaminations (the operator of the last control touched the bare skin of the rescuer who was removing his clothes), and throwing used PPE into the barrel creating airborne contaminations

In general, the PPE was well used by the tactical forces as well as by the rescue teams.

Chemical incidents are characterized by the involvement of several services, such as law enforcement, fire and emergency medical responders, and possibly deminers, civil protection… Typically, an Advanced Command Post (ACP) is set up on-site, from which the Incident Commander (IC) manages the emergency with other department representatives. In this exercise, this command post was not identified in the hot zone, but the operations were managed by a permanent tunnel control center on the Spanish side and a command post on the French side through a fire department communication and command truck located on the road near the tunnel head.

The participation of the Ouvry company

Based on the results obtained during the implementation of such a complex real-life exercise, it immediately became clear how essential it is to ensure regular exercises not only to practice the tunnel operators’ procedures, but also to test their synergies with the first responders involved.

This exercise also allowed to highlight current gaps and then to discuss the potential redistribution of resources as well as the reformulation of fundamental roles and responsibilities to improve the response capacity of the multiple actors involved in an integrated manner. The results obtained by TRANSTUN can be considered as a modular and flexible operational approach that can be replicated in several contexts involving CBRN risks and road and rail tunnel safety.